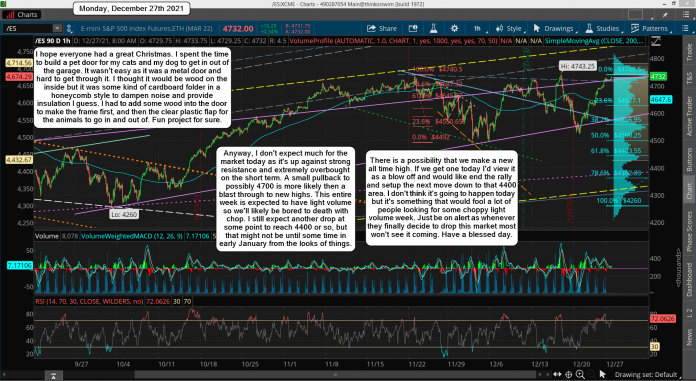 I hope everyone had a great Christmas. I spent the time to build a pet door for my cats and my dog to get in out of the garage. It wasn't easy as it was a metal door and hard to get through it. I thought it would be wood on the inside but it was some kind of cardboard folder in a honeycomb style to dampen noise and provide insulation I guess. I had to add some wood into the door to make the frame first, and then the clear plastic flap for the animals to go in and out of. Fun project for sure.

Anyway, I don't expect much for the market today as it's up against strong resistance and extremely overbought on the short term. A small pullback to possibly 4700 is more likely then a blast through to new highs. This entire week is expected to have light volume so we'll likely be bored to death with chop. I still expect another drop at some point to reach 4400 or so, but that might not be until some time in early January from the looks of things.

There is a possibility that we make a new all time high.  If we get one today I'd view it as a blow off and would like end the rally and setup the next move down to that 4400 area. I don't think it's going to happen today but it's something that would fool a lot of people looking for some choppy light volume week. Just be on alert as whenever they finally decide to drop this market most won't see it coming. Have a blessed day.