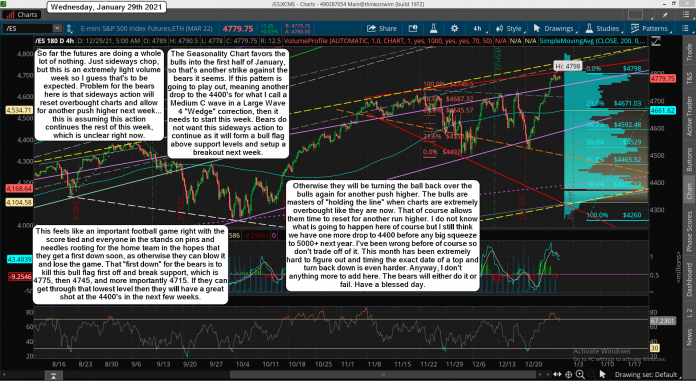 So far the futures are doing a whole lot of nothing. Just sideways chop, but this is an extremely light volume week so I guess that's to be expected. Problem for the bears here is that sideways action will reset overbought charts and allow for another push higher next week... this is assuming this action continues the rest of this week, which is unclear right now.

The Seasonality Chart favors the bulls into the first half of January, so that's another strike against the bears it seems. If this pattern is going to play out, meaning another drop to the 4400's for what I call a Medium C wave in a Large Wave 4 "Wedge" correction, then it needs to start this week. Bears do not want this sideways action to continue as it will form a bull flag above support levels and setup a breakout next week.

This feels like an important football game right with the score tied and everyone in the stands on pins and needles rooting for the home team in the hopes that they get a first down soon, as otherwise they can blow it and lose the game. That "first down" for the bears is to kill this bull flag first off and break support, which is 4775, then 4745, and more importantly 4715. If they can get through that lowest level then they will have a great shot at the 4400's in the next few weeks.

Otherwise they will be turning the ball back over the bulls again for another push higher. The bulls are masters of "holding the line" when charts are extremely overbought like they are now. That of course allows them time to reset for another run higher. I do not know what is going to happen here of course but I still think we have one more drop to 4400 before any big squeeze to 5000+ next year. I've been wrong before of course so don't trade off of it. This month has been extremely hard to figure out and timing the exact date of a top and turn back down is even harder. Anyway, I don't anything more to add here. The bears will either do it or fail. Have a blessed day.