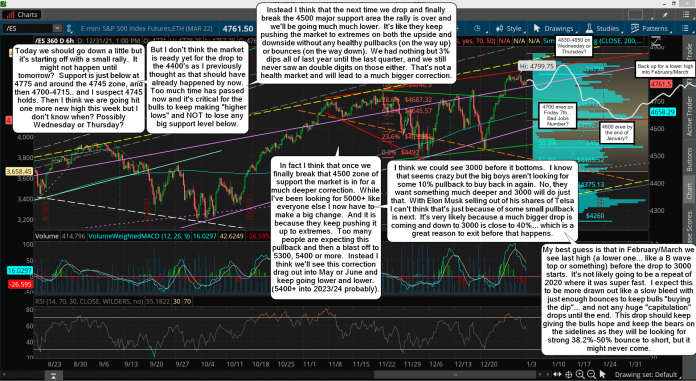 Today we should go down a little but it's starting off with a small rally.  It might not happen until tomorrow?  Support is just below at 4775 and around the 4745 zone, and then 4700-4715.. and I suspect 4745 holds. Then I think we are going hit one more new high this week but I don't know when? Possibly Wednesday or Thursday?

But I don't think the market is ready yet for the drop to the 4400's as I previously thought as that should have already happened by now. Too much time has passed now and it's critical for the bulls to keep making "higher lows" and NOT to lose any big support level below.

Instead I think that the next time we drop and finally break the 4500 major support area the rally is over and we'll be going much much lower. It's like they keep pushing the market to extremes on both the upside and downside without any healthy pullbacks (on the way up) or bounces (on the way down). We had nothing but 3% dips all of last year until the last quarter, and we still never saw an double digits on those either. That's not a health market and will lead to a much bigger correction.

In fact I think that once we finally break that 4500 zone of support the market is in for a much deeper correction. While I've been looking for 5000+ like everyone else I now have to make a big change. And it is because they keep pushing it up to extremes. Too many people are expecting this pullback and then a blast off to 5300, 5400 or more. Instead I think we'll see this correction drag out into May or June and keep going lower and lower. (5400+ into 2023/24 probably).

I think we could see 3000 before it bottoms. I know that seems crazy but the big boys aren't looking for some 10% pullback to buy back in again. No, they want something much deeper and 3000 will do just that. With Elon Musk selling out of his shares of Telsa I can't think that's just because of some small pullback is next. It's very likely because a much bigger drop is coming and down to 3000 is close to 40%... which is a great reason to exit before that happens.

My best guess is that in February/March we see last high (a lower one... like a B wave top or something) before the drop to 3000 starts. It's not likely going to be a repeat of 2020 where it was super fast. I expect this to be more drawn out like a slow bleed with just enough bounces to keep bulls "buying the dip"... and not any huge "capitulation" drops until the end. This drop should keep giving the bulls hope and keep the bears on the sidelines as they will be looking for strong 38.2%-50% bounce to short, but it might never come.