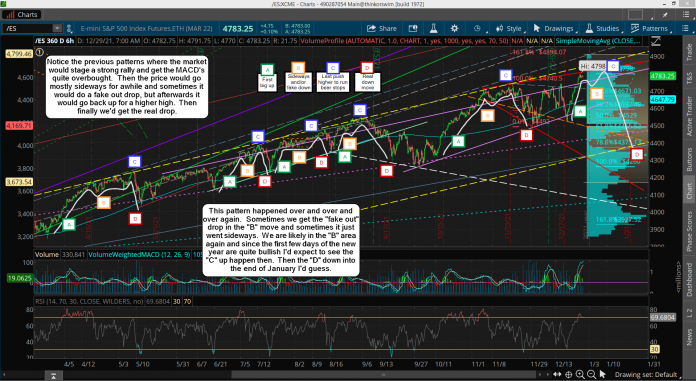 Yesterday we did get a small pullback to the 4745 area. The low was 4747.50 and was hit and reversed super fast. Then the rest of the day was choppy bouncing between slightly negative to slightly positive into the close. This is the ABCD pattern I spoke of last week and showed on a chart how the market tends to repeat them over and over.

Yesterday we were in the "B" zone and this mornings breakout is the "C" part starting. It might carry over into Wednesday but I doubt if it last much longer. On that chart I pointed to the 4400 area as the expected low of the "D" part but as I explained yesterday I no longer expect that level to get hit. Instead I think we drop into the 4600's only and then bounce back up into February and possibly March.

And as I again explained yesterday it should be choppy to frustrate both bulls and bears after the low. This will be the last distribution zone for those three months before a much bigger drop starts, but again, I don't think it will be fast and furious like the 2020 drop was. No, this should be a slow and steady decline over several months to keep the bulls buying the dips and the bears afraid to short it. It will not be easy to stay short as every move lower will fool most into thinking that's the bottom, but I don't see that until the 3000 area is hit on the ES/SPX. Once there everyone will become super bearish looking for the 2020 lows to get taken out next, but it won't happen.

This final push higher today/tomorrow is very likely going to make to top of a five wave rally up from that 2020 low in March, which will just be some extra large wave 1 with the drop to 3000 the extra large wave 2 down. That's why it won't revisit the lows again as a wave 2 of any degree must make a higher low. So why the 3000 area you ask? Many reasons actually. First is the fake print I have of 3013 on the SPX.

Other reasons are that the 61.8% Fibonacci Level for that drop will be at 3191.58 as of the current high today on the the SPX calculated with the current low in March of 2020. There are several important trendlines pointing to the 3000 zone as well. The prior low of the ABC Large Wave 2 from September to October of 2020 is at 3209.45, and I'd be quite shocked if SkyNet didn't pierce through that support to hit the stops on the bulls long from there. That's of course around that 61.8% level too, which many smart traders will see and start accumulating longs there. Be will all know how SkyNet loves to hit stops before reversing, which again is another reason to support my thoughts that we'll go below that Fibonacci Level to hit the FP at 3013 and run the stops below that Large Wave 2 low. The 78.6% level is at 2751.91 currently and if the 61.8% area is taken out traders will look for that next level of course.

But it should not be hit I think as once the 61.8% level goes the bulls will start flipping to become bears looking for the March 2020 low next, and you know that the market needs bears short to squeeze it. So the zone is between 3000 and 3200 in my opinion. From there we should rally back up into 2023/24 for the final Extra Large Wave 3, 4 and 5 to finish an 87 year cycle. Then the real crash happens. This lines up with the Presidential Cycle I've mentioned many times as well. Short term, again we should top out today or tomorrow, like another 30-60 points up I best. Have a blessed day.