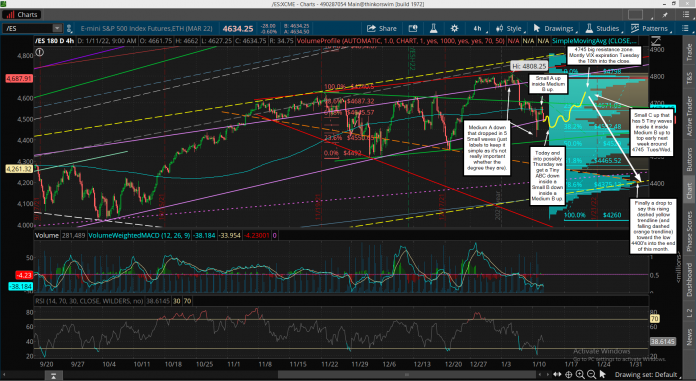 Yesterday I drew this chart shortly after the open as the market didn't continue the up move and sold off instead. My thinking was that the B wave up, which I'm calling a Medium B wave, is now going to subdivide in smaller waves and last about a week instead of a fast 1-2 day rally and the collapse for the Medium C wave. If we were to have opened up and rallied hard to the 4700 wall of resistance zone then I'd think it would end there as just a 1-2 day "one wave" bounce. But since it sold off after the open and then pushed back up I now believe it will subdivide into 3 smaller waves... basically an ABC up inside this Medium B up.

This lines up much better anyway with common pattern of the Thurs/Fri "Pitbull Low" being put in on the second week of the month.  Which is so all the smart money can sell naked call options on the VIX when it's at it's peak and then rally the market hard the third week into the monthly options expiration.

This is for both the VIX (next Tuesday at the closed, but technically 8am EST before the open on Wednesday) and the rest of the big indexes on Friday the 21st. This Medium B up can go as high as 4745 as that's the next big resistance zone on the ES, and a likely spot where bears shorting right now will get squeezed out and quit thinking we are off to new all time high.

But that should only be the top of the Medium B wave, and it should be around next Tuesday or Wednesday so those VIX calls the smart money sold will expire worthless and they get to keep all the money. This pattern repeats probably 9-10 months of every year I'd guess. Not always (obviously) but it happens a lot, and the alignment of the waves and "possible" waves into that period this month support this idea that it will happen.

Seasonality supports it too as the last half of January is typically bearish, so after the 18th/19th I'd say we drop right into the next FOMC meeting on 25th/26th to put in low for the expected Medium C wave down. And you can see where support is at on the chart, which is around the low 4400's, which I think is the target low.

Remember from by other posts where those "possible" FP's on the Yahoo Finance chart have 441.65 on the SPY, which is roughly 4433 on the SPX right now (about 8 points lower on the ES). This is again supporting this forecast of an ABC down into that low 4400 zone by the end of this month.

After that I'll look for a move up to around 5000 into mid-March, which again we have a FP on that too, which is 496.36 SPY. After we get there we'll just try to figure out the next move. It should be either down 1000+ points or up a 1000+ point, with June/July as the likely end of that move. I think it will be a down move but again, we could see a cycle inversion happen, meaning we top at 6000+ into June/July instead of bottom. For now though I'll just be focused on next Tuesday to see if a high odds short appears. Have a blessed day. 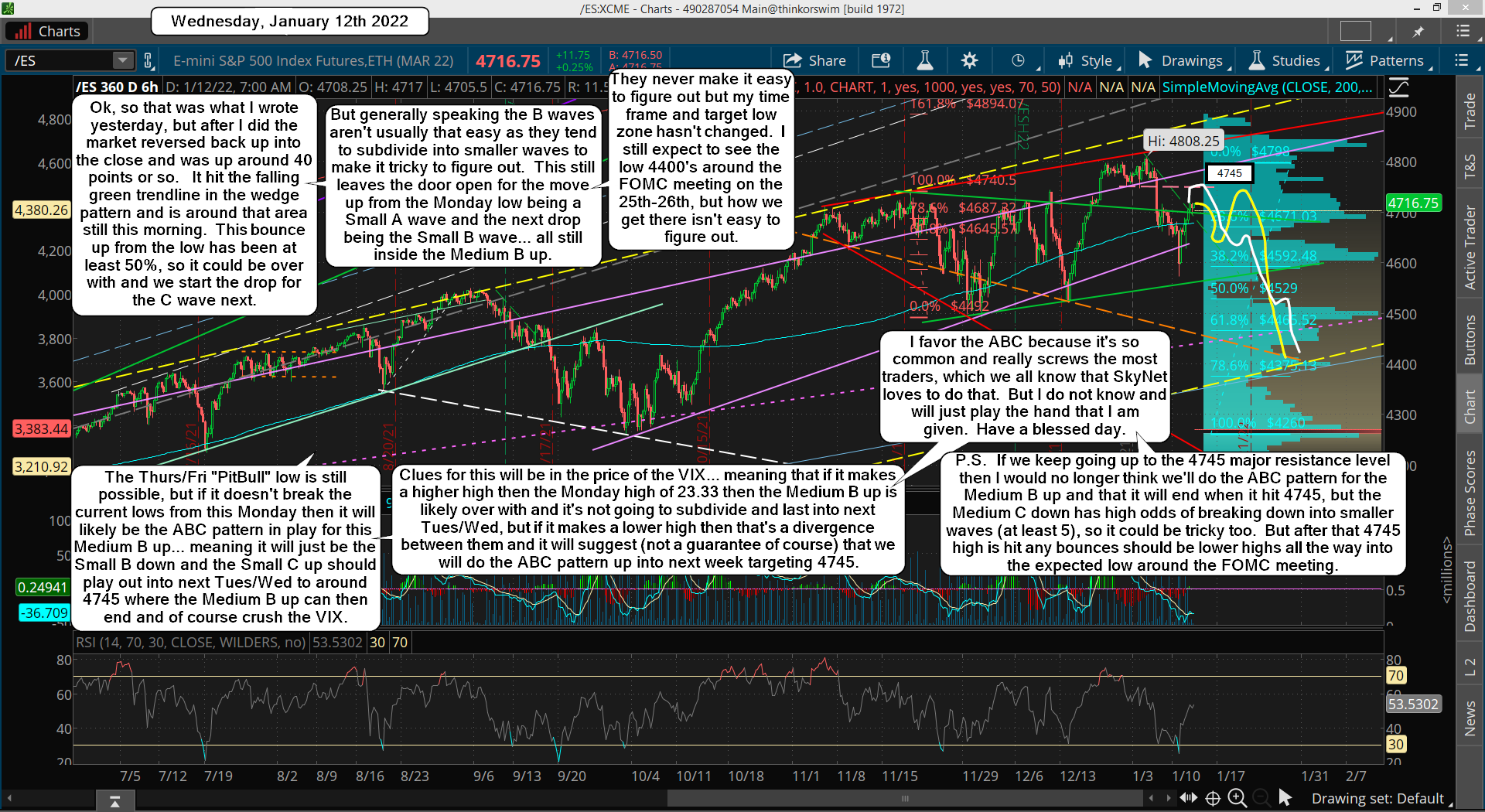 Ok, so that was what I wrote yesterday, but after I did the market reversed back up into the close and was up around 40 points or so.   It hit the falling green trendline in the wedge pattern and is around that area still this morning.  This bounce up from the low has been at least 50%, so it could be over with and we start the drop for the C wave next.

But generally speaking the B waves aren't usually that easy as they tend to subdivide into smaller waves to make it tricky to figure out.  This still leaves the door open for the move up from the Monday low being a Small A wave and the next drop being the Small B wave... all still inside the Medium B up.

The Thurs/Fri "PitBull" low is still possible, but if it doesn't break the current lows from this Monday then it will likely be the ABC pattern in play for this Medium B up... meaning it will just be the Small B down and the Small C up should play out into next Tues/Wed to around 4745 where the Medium B up can then end and of course crush the VIX.

Clues for this will be in the price of the VIX... meaning that if it makes a higher high then the Monday high of 23.33 then the Medium B up is likely over with and it's not going to subdivide and last into next Tues/Wed, but if it makes a lower high then that's a divergence between them and it will suggest (not a guarantee of course) that we will do the ABC pattern up into next week targeting 4745.

I favor the ABC because it's so common and really screws the most traders, which we all know that SkyNet loves to do that.  But I do not know and will just play the hand that I am given.  Have a blessed day.

P.S.  If we keep going up to the 4745 major resistance level then I would no longer think we'll do the ABC pattern for the Medium B up and that it will end when it hit 4745, but the Medium C down has high odds of breaking down into smaller waves (at least 5), so it could be tricky too.  But after that 4745 high is hit any bounces should be lower highs all the way into the expected low around the FOMC meeting.