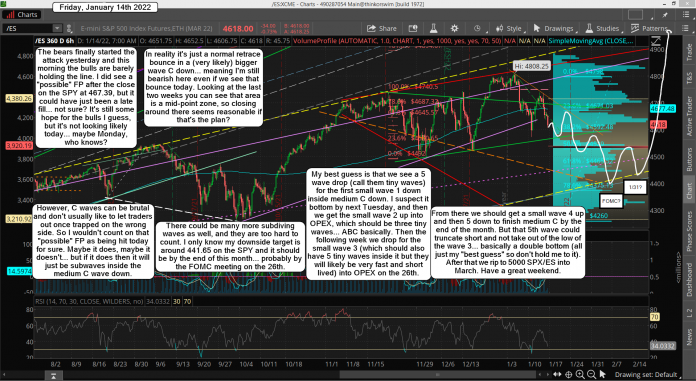 The bears finally started the attack yesterday and this morning the bulls are barely holding the line. I did see a "possible" FP after the close on the SPY at 467.39, but it could have just been a late fill... not sure? It's still some hope for the bulls I guess, but it's not looking likely today... maybe Monday, who knows?

In reality it's just a normal retrace bounce in a (very likely) bigger wave C down... meaning I'm still bearish here even if we see that bounce today. Looking at the last two weeks you can see that area is a mid-point zone, so closing around there seems reasonable if that's the plan?

However, C waves can be brutal and don't usually like to let traders out once trapped on the wrong side. So I wouldn't count on that "possible" FP as being hit today for sure. Maybe it does, maybe it doesn't... but if it does then it will just be subwaves inside the medium C wave down.

There could be many more subdiving waves as well, and they are too hard to count. I only know my downside target is around 441.65 on the SPY and it should be by the end of this month... probably by the FOMC meeting on the 26th.

My best guess is that we see a 5 wave drop (call them tiny waves) for the first small wave 1 down inside medium C down. I suspect it bottom by next Tuesday, and then we get the small wave 2 up into OPEX, which should be three tiny waves... ABC basically. Then the following week we drop for the small wave 3 (which should also have 5 tiny waves inside it but they will likely be very fast and short lived) into OPEX on the 26th.

From there we should get a small wave 4 up and then 5 down to finish medium C by the end of the month. But that 5th wave could truncate short and not take out of the low of the wave 3... basically a double bottom (all just my "best guess" so don't hold me to it). After that we rip to 5000 SPX/ES into March. Have a great weekend.