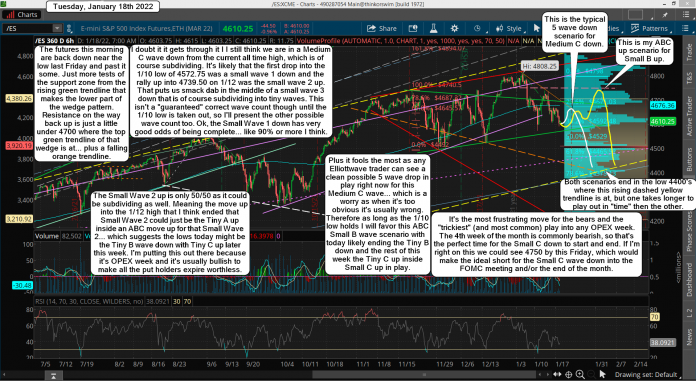 The futures this morning are back down near the low last Friday and past it some. Just more tests of the support zone from the rising green trendline that makes the lower part of the wedge pattern. Resistance on the way back up is just a little under 4700 where the top green trendline of that wedge is at... plus a falling orange trendline.

I doubt it it gets through it I I still think we are in a Medium C wave down from the current all time high, which is of course subdividing. It's likely that the first drop into the 1/10 low of 4572.75 was a small wave 1 down and the rally up into 4739.50 on 1/12 was the small wave 2 up. That puts us smack dab in the middle of a small wave 3 down that is of course subdividing into tiny waves. This isn't a "guaranteed" correct wave count though until the 1/10 low is taken out, so I'll present the other possible wave count too. Ok, the Small Wave 1 down has very good odds of being complete... like 90% or more I think.

The Small Wave 2 up is only 50/50 as it could be subdividing as well. Meaning the move up into the 1/12 high that I think ended that Small Wave 2 could just be the Tiny A up inside an ABC move up for that Small Wave 2... which suggests the lows today might be the Tiny B wave down with Tiny C up later this week. I'm putting this out there because it's OPEX week and it's usually bullish to make all the put holders expire worthless.

Plus it fools the most as any Elliottwave trader can see a clean possible 5 wave drop in play right now for this Medium C wave... which is a worry as when it's too obvious it's usually wrong. Therefore as long as the 1/10 low holds I will favor this ABC Small B wave scenario with today likely ending the Tiny B down and the rest of this week the Tiny C up inside Small C up in play.

It's the most frustrating move for the bears and the "trickiest" (and most common) play into any OPEX week. The 4th week of the month is commonly bearish, so that's the perfect time for the Small C down to start and end. If I'm right on this we could see 4750 by this Friday, which would make the ideal short for the Small C wave down into the FOMC meeting and/or the end of the month.

Off topic... Over the weekend I was just browsing around and a tweet came up from Lauren Boebert about Fauci and I decided to comment on it. Twitter blocked me immediately and locked my account for 12 hours. It seems that freedom of speech is only available for the Satanists communist left and not for the patriot God believing conservatives. 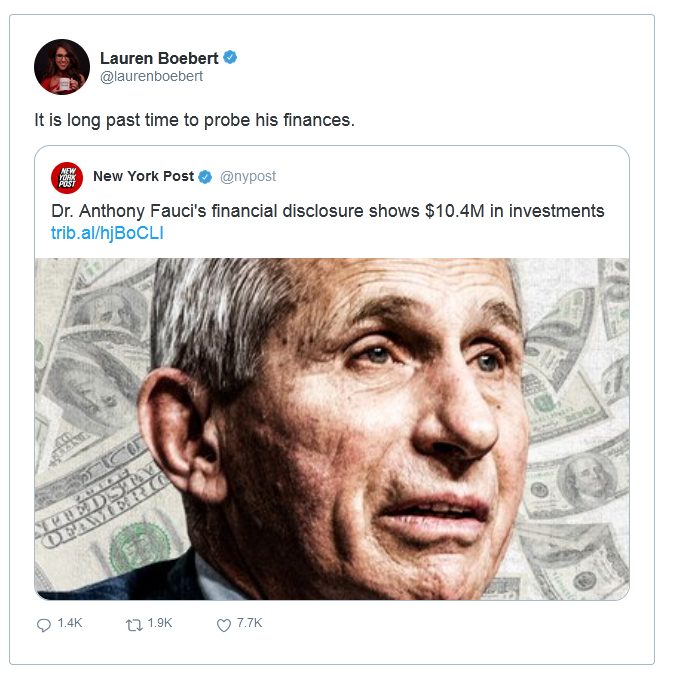 Clearly on that twitter thread you can see how they allow every bot to attack Lauren but you can't defend her and counter attack the bots. So if I lose my twitter account permanent you'll know why. But I'll continue to do daily posts here on my blog as at least I own it and can tell the truth without censorship. 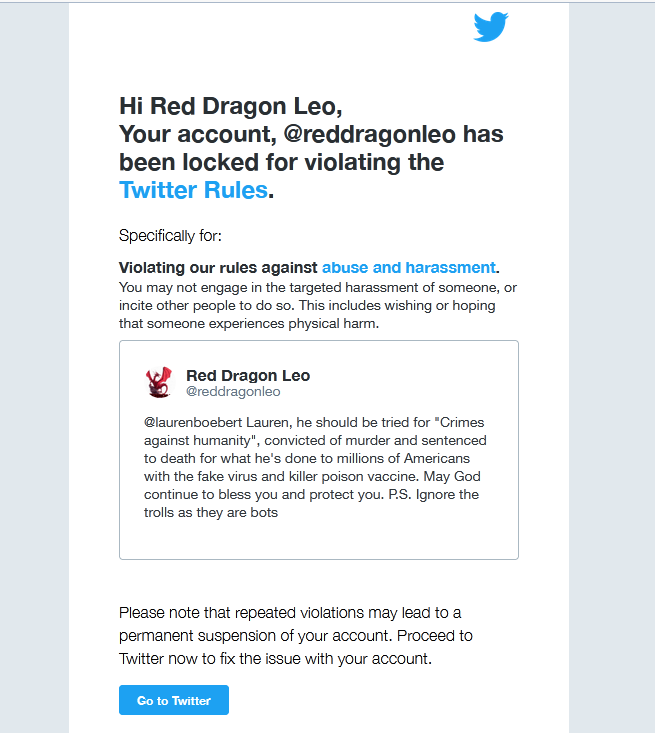 While my primary focus is about the stock market I can't ignore what's going on in the world and will use my right to speak freely for as long as I can. If the Satanist win then we'll all have zippers on our mouths (pretty much already do with the worthless face diapers people wear).