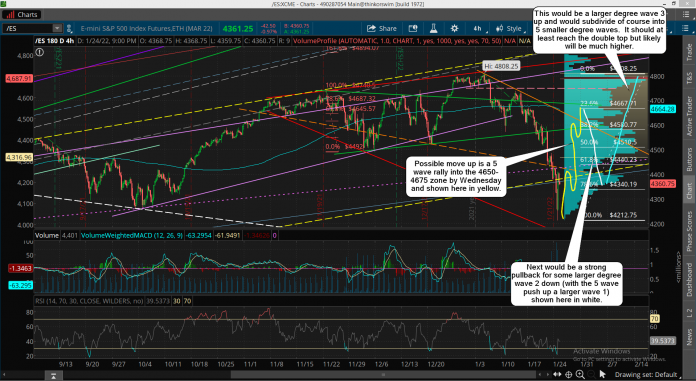 Yesterdays drop was more then I expected but apparently it was needed to run all the stops on the bulls and lure the bears into shorting the bottom. Today and into the rest of this week we should see some more up's and down's to frustrate both bulls and bears alike, but to me it will just be a series of wave 1's up and 2's down to setup a huge wave 3 up into February.

All of these moves are now (very likely) inside the final 5th wave up, which could reach 5700 if wave 5 equals wave 1, which they commonly do. This is just simple calculation based on points and it's ignoring the FP's on Yahoo page that obviously haven't worked out so far. While I've never been able to figure out which fake prints are real and which one's are truly just noise or glitches I've never had any luck with the one's on the Yahoo page ever working. The one's inside of the Think Or Swim platform from TDameritrade, as well as other platforms with their software, seem to be the most accurate.

Currently there is a 341.61 FP on the QQQ on the TOS platform, which could easily be hit today. It's also about a 50% pullback from the rally up off the low yesterday, which makes for a great wave 2 down. Therefore it stands to reason that's where we'll go to and likely turn from sometime today.

What I'm thinking here is that we get some kind of rally up into the FOMC meeting tomorrow, which I hope is a 5 wave pattern. Then after the meeting we drop back at least half to make all the bears think it's a huge wave C down with the rally up a B wave. This should be a bear trap as what comes after would be a massive wave 3 up that will easily make a new all time high. 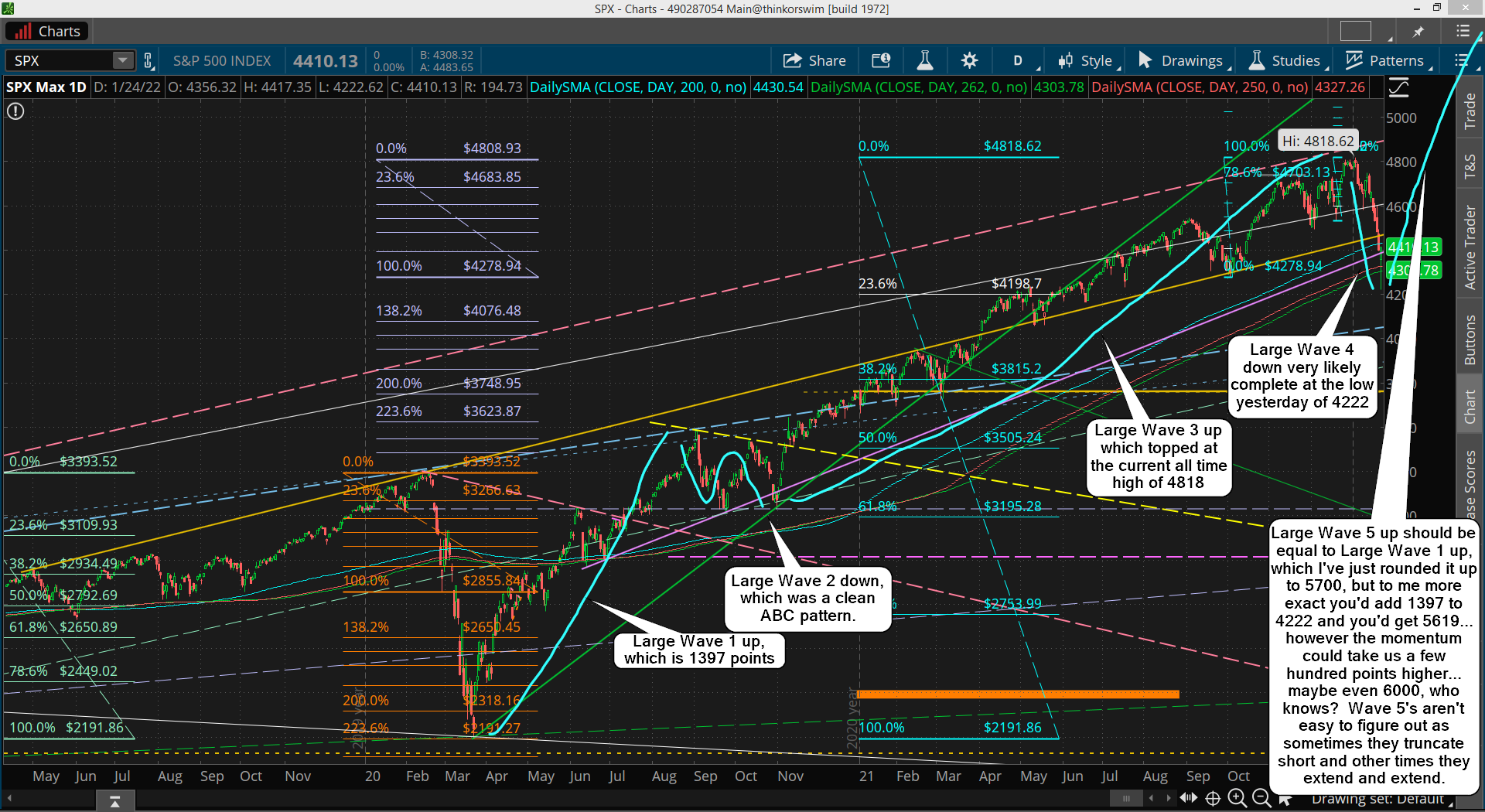 Doing some rough calculations here I'd guess this first wave 1 up of the low will reach around 4600 into the FOMC or right afterwards. From the low just a little over 4200 that's about 400 points up for this wave 1 (which again will likely divide into 5 smaller waves with the 2 wave down probably in play right now). From that 4600 zone, which is right into resistance from a falling orange trendline, another 50% pullback would be back down to roughly 4400 to form that wave 2 down.

Therefore the wave 3 should be a larger multiple then the common 1.618% to reach that 5700 high I think as you'll only have a 4 down and 5 up left and I don't see them being that much. I'd have to think we'd be around 5300-5400 for the wave 3, then back a few hundred points for the wave 4 and then up to 5700 for the wave 5... and that then ends that large wave 5 up (from the current 4300 low from yesterday) and the entire 5 wave rally from the March 2020 low. All just me guessing here but that's my rough idea and thoughts for the big picture. For the short picture I think down early and up later in the day and into the FOMC tomorrow. Have a blessed day.