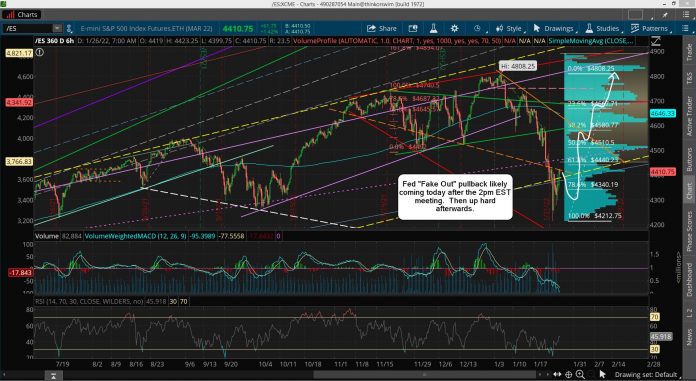 Doesn't look like we are going to get the move up to 4600 now. That pop is in play now and wherever it stops at today that's should be it. And it should top before the FOMC meeting a 2pm EST as that's what the market is waiting for right now. I don't think the Fed will change anything they and will likely continue with the plan to raise rates at some point this year.

That's considered as being "hawkish" and usually scares the market as the free money is being pulled back. But as you should know by know the market "front runs" all this news, and that is of course the reason for the "timing" of this big drop that we've had over the last few weeks (basically since the top).

That means it's already "baked-in" and no further huge decline is needed. But that doesn't mean there won't be any shake out drop after the meeting as I fully expect to see one, but it shouldn't hold. It will be a wave 2 pullback of some degree with the current move up from the low being the wave 1... which leaves a wave 3 to follow into February.

So, in my humble opinion the drop will get after the FOMC today will be a fake out and the last chance to get long and hold until some crazy high is reached in the next several months. Will it be just 5000 or up to 6000... I don't know? But after it's hit we will enter the largest bear market since 1929, that should eventfully bottom below 2000 on the SPX. The first drop could be 40% if we reach 6000 as my thoughts are that we'll go back to the closing price for the year 2020, which is 3722 SPX, and very close to a need FP that I'm sure everyone has saw now. 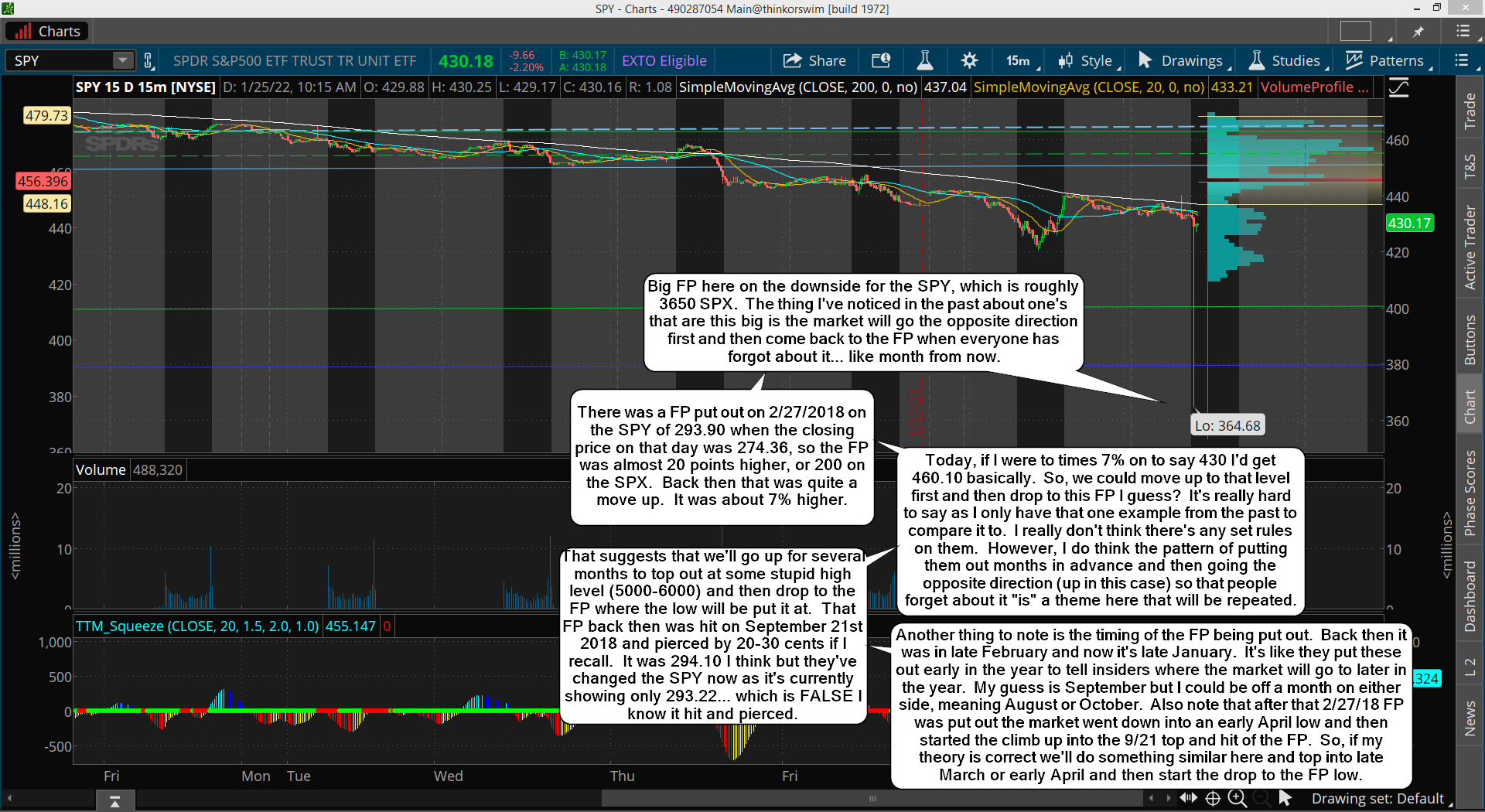 It came out yesterday and is for 364.68 on the SPY. This should be the target low for later this year, like maybe September. It will only be the A wave down and then a B wave up should follow, with the C wave ending in 2023 sometime.

Yesterday in the chatroom I talked about this and explained how I got a FP back on 2/27/2018 for 293.90 on the SPY and what happened afterwards. I explained that while that was around 20 points (200 SPX) above the current price of 274.36 that day the market did NOT continue up to hit that FP after it was put out. Instead the market rolled over and dropped into an April 2nd 2018 low... and then started the rally up to the FP into 9/21 later that year. 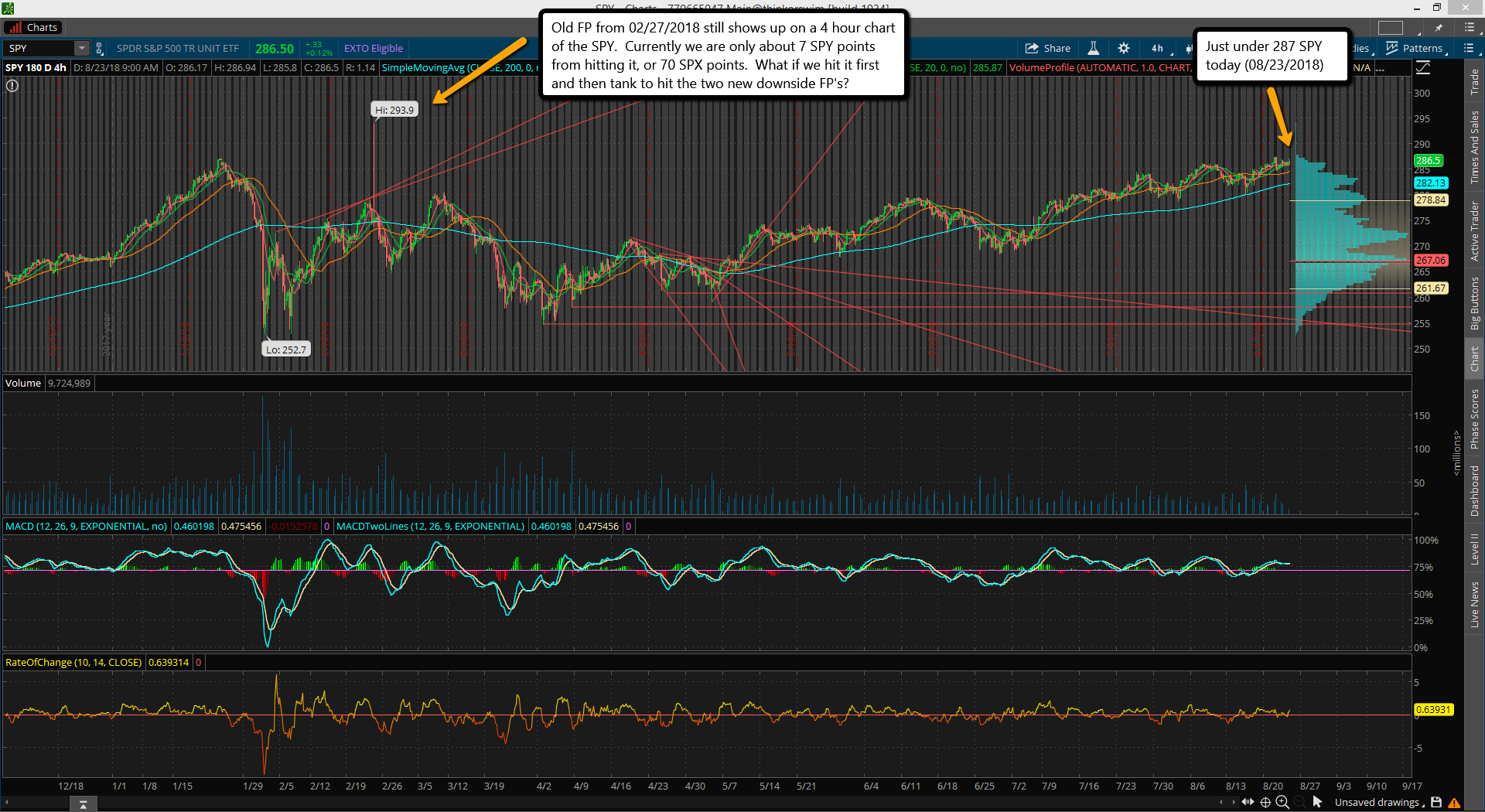 Today it's a downside FP, so the market will go up first. The low is likely already in from Monday and today we'll just get a fake out drop to lure in some bears and take out some bulls. I think it will be the last buying opportunity before the next huge rally starts. It could end by late March or early April, I don't know? Maybe it drags into May or possibly June but with the speed of the moves today (compared to 2018) I tend to think it will be over within 2-3 months.