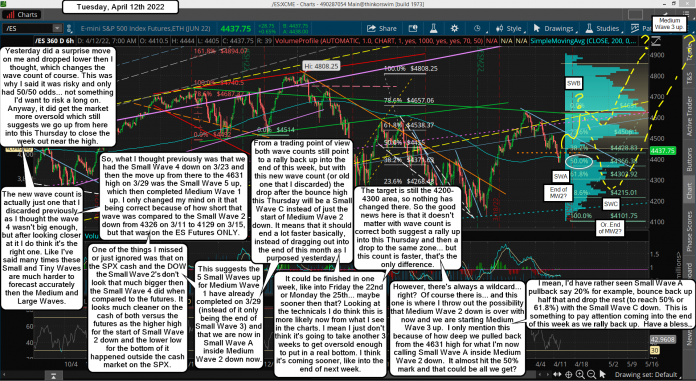 Yesterday did a surprise move on me and dropped lower then I thought, which changes the wave count of course. This was why I said it was risky and only had 50/50 odds... not something I'd want to risk a long on. Anyway, it did get the market more oversold which still suggests we go up from here into this Thursday to close the week out near the high.

The new wave count is actually just one that I discarded previously as I thought the wave 4 wasn't big enough, but after looking closer at it I do think it's the right one. Like I've said many times these Small and Tiny Waves are much harder to forecast accurately then the Medium and Large Waves.

One of the things I missed or just ignored was that on the SPX cash and the DOW the Small Wave 2's don't look that much bigger then the Small Wave 4 did when compared to the futures. It looks much cleaner on the cash of both versus the futures as the higher high for the start of Small Wave 2 down and the lower low for the bottom of it happened outside the cash market on the SPX.

This suggests the 5 Small Waves up for Medium Wave 1 have already completed on 3/29 (instead of it only being the end of Small Wave 3) and that we are now in Small Wave A inside Medium Wave 2 down now.

From a trading point of view both wave counts still point to a rally back up into the end of this week, but with this new wave count (or old one that I discarded) the drop after the bounce high this Thursday will be a Small Wave C instead of just the start of Medium Wave 2 down. It means that it should end a lot faster basically, instead of dragging out into the end of this month as I purposed yesterday.

It could be finished in one week, like into Friday the 22nd or Monday the 25th... maybe sooner then that? Looking at the technicals I do think this is more likely now from what I see in the charts. I mean I just don't think it's going to take another 3 weeks to get oversold enough to put in a real bottom. I think it's coming sooner, like into the end of next week.

The target is still the 4200-4300 area, so nothing has changed there. So the good news here is that it doesn't matter with wave count is correct both suggest a rally up into this Thursday and then a drop to the same zone... but this count is faster, that's the only difference.

However, there's always a wildcard... right?  Of course there is... and this one is where I throw out the possibility that Medium Wave 2 down is over with now and we are starting Medium Wave 3 up.  I only mention this because of how deep we pulled back from the 4631 high for what I'm now calling Small Wave A inside Medium Wave 2 down.  It almost hit the 50% mark and that could be all we get?

I mean, I'd have rather seen Small Wave A pullback say 20% for example, bounce back up half that and drop the rest (to reach 50% or 61.8%) with the Small Wave C down.  This is something to pay attention coming into the end of this week as we rally back up.  Have a bless day.