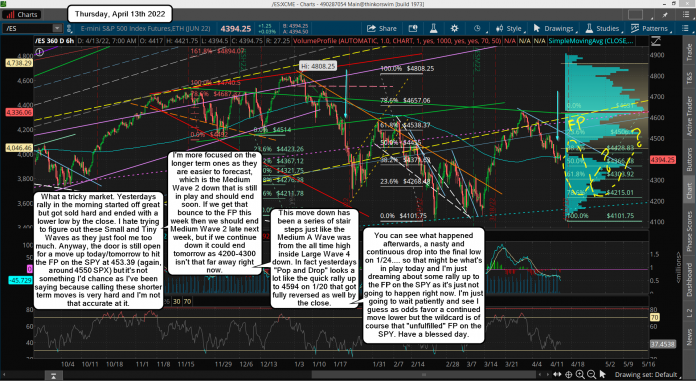 What a tricky market. Yesterdays rally in the morning started off great but got sold hard and ended with a lower low by the close. I hate trying to figure out these Small and Tiny Waves as they just fool me too much. Anyway, the door is still open for a move up today/tomorrow to hit the FP on the SPY at 453.39 (again, around 4550 SPX) but it's not something I'd chance as I've been saying because calling these shorter term moves is very hard and I'm not that accurate at it.

I'm more focused on the longer term ones as they are easier to forecast, which is the Medium Wave 2 down that is still in play and should end soon. If we get that bounce to the FP this week then we should end Medium Wave 2 late next week, but if we continue down it could end tomorrow as 4200-4300 isn't that far away right now.

This move down has been a series of stair steps just like the Medium A Wave was from the all time high inside Large Wave 4 down. In fact yesterdays "Pop and Drop" looks a lot like the quick rally up to 4594 on 1/20 that got fully reversed as well by the close.

You can see what happened afterwards, a nasty and continuous drop into the final low on 1/24.... so that might be what's in play today and I'm just dreaming about some rally up to the FP on the SPY as it's just not going to happen right now. I'm just going to wait patiently and see I guess as odds favor a continued move lower but the wildcard is of course that "unfulfilled" FP on the SPY. Have a blessed day.