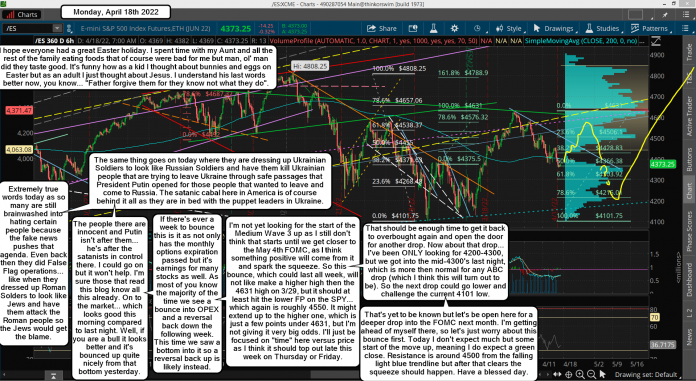 I hope everyone had a great Easter holiday. I spent time with my Aunt and all the rest of the family eating foods that of course were bad for me but man, ol' man did they taste good. It's funny how as a kid I thought about bunnies and eggs on Easter but as an adult I just thought about Jesus. I understand his last words better now, you know... "Father forgive them for they know not what they do".

Extremely true words today as so many are still brainwashed into hating certain people because the fake news pushes that agenda. Even back then they did False Flag operations... like when they dressed up Roman Solders to look like Jews and have them attack the Roman people so the Jews would get the blame.

The same thing goes on today where they are dressing up Ukrainian Soldiers to look like Russian Soldiers and have them kill Ukrainian people that are trying to leave Ukraine through safe passages that President Putin opened for those people that wanted to leave and come to Russia. The satanic cabal here in America is of course behind it all as they are in bed with the puppet leaders in Ukraine.

The people there are innocent and Putin isn't after them... he's after the satanists in control there. I could go on but it won't help. I'm sure those that read this blog know all this already. On to the market... which looks good this morning compared to last night. Well, if you are a bull it looks better and it's bounced up quite nicely from that bottom yesterday.

If there's ever a week to bounce this is it as not only has the monthly options expiration passed but it's earnings for many stocks as well. As most of you know the majority of the time we see a bounce into OPEX and a reversal back down the following week. This time we saw a bottom into it so a reversal back up is likely instead.

I'm not yet looking for the start of the Medium Wave 3 up as I still don't think that starts until we get closer to the May 4th FOMC, as I think something positive will come from it and spark the squeeze. So this bounce, which could last all week, will not like make a higher high then the 4631 high on 3/29, but it should at least hit the lower FP on the SPY... which again is roughly 4550. It might extend up to the higher one, which is just a few points under 4631, but I'm not giving it very big odds. I'll just be focused on "time" here versus price as I think it should top out late this week on Thursday or Friday.

That should be enough time to get it back to overbought again and open the door for another drop. Now about that drop... I've been ONLY looking for 4200-4300, but we got into the mid-4300's last night, which is more then normal for any ABC drop (which I think this will turn out to be). So the next drop could go lower and challenge the current 4101 low.

That's yet to be known but let's be open here for a deeper drop into the FOMC next month. I'm getting ahead of myself there, so let's just worry about this bounce first. Today I don't expect much but some start of the move up, meaning I do expect a green close. Resistance is around 4500 from the falling light blue trendline but after that clears the squeeze should happen. Have a blessed day.