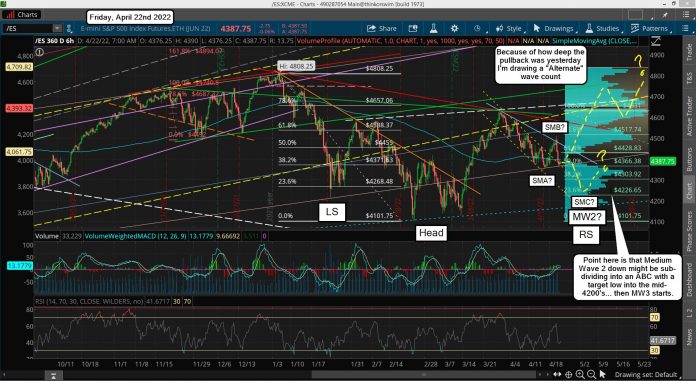 What a sell off yesterday! That was not the kind of pullback I was looking for, that's for sure. Technically the 4355 low from this past Sunday hasn't been broken, so my wave count can still be correct... but if yesterdays drop was a Tiny Wave 2 down it retraced probably 90-95% of the Tiny Wave 1 up, and that's not normal.

True that it can still work out and the market is resting on support this morning from a rising pinkish trendline, but it's made a bear flag afterhours and this morning with tons of trapped bulls. I just don't have the same belief today that I did yesterday that the bottom is "in" and that we are starting Medium Wave 3 up.

Keep in mind though that C doesn't have to equal A as it can extend (common is 1.618%) or truncate short. In bull markets, which we are still technically in from the 2020 bottom, the corrections commonly have C waves that either equal, truncate short, or barely go beyond the length of the A wave... so that's what I'm expecting this time too.

Any way you slice and dice this the zone points to the mid-4200's for the low of Small Wave C... "if" this does indeed turn out to be an ABC correction for Medium Wave 2 down.

Remember that's not yet confirmed as we still haven't taken out the 4355 low yet. That drop from 4631 to 4355 is roughly 50% of the up move from the 4101 low for Medium Wave 1, which is plenty to complete that wave. We don't have to drop in an ABC to the 4200's is what I'm saying. The low could still be "in" and we are just shaking out bulls before a powerful move up inside Medium Wave 3 happens. It certainly doesn't feel like that from yesterdays scary reversal but until 4355 is taken out that drop was just a Tiny Wave 2 inside Small Wave 1 up. Which wave count do I think is correct? Hard too say?

They have bulls trapped now and tons of stops below 4355, and I don't think many bears caught that drop and shorted it. So I'm going to lean toward this new alternate count as I think they want as many bears onboard before Medium Wave 3 starts going up and dropping into the 4200's would load the boat full of bears looking for 4101 to break.

Of course when everyone is short the opposite happens and a powerful squeeze starts. The rally from 4355 to 4510 was quite weak really, which suggests there are still too many bulls in the market right now. They all saw that 50% pullback like I did and got long... plus it's an obvious "Inverted Head And Shoulders" pattern with the 1/24 low of 4212 being the left shoulder and the head the 4101 low.

Anyway, today we have the most "puts" at the 440 SPY level for option expiration, so we might just chop all day and "pin" it there? Tough call about today but if we do chop then Monday should breakdown and take out the 4355 low. Have a great weekend.