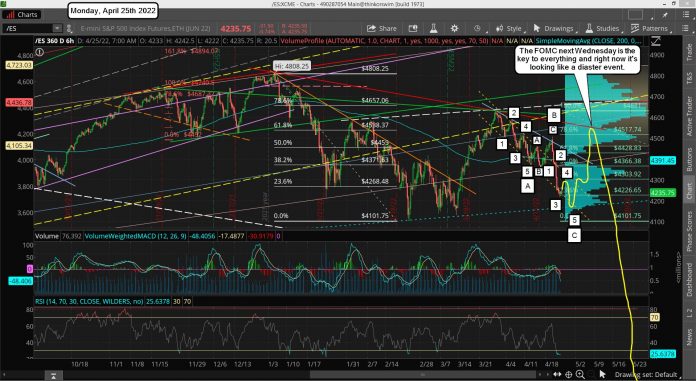 The market took another beating Friday as it dropped right into the mid-4200's where my alternative count pointed to. Clearly Thursday and Friday was a Wave 3 down inside a C Wave, so this isn't likely done yet. It's missing the Wave 4 bounce and Wave 5 capitulation, which should come today and into tomorrow possibly. So another drop to pierce the 4200 is possible, but I don't know the target... I only know that odds favor another lower low. If it breaks the 4101 low then it should only be briefly as then everyone will be looking for 4000 and that should be the time it reverses back up.

I'd prefer a pierce of it (like 4060-4070) so they can take out the stops the bulls have setting below 4101 and get a massive short squeeze on the bears with no bulls long. That would be best as that could open the door for new all time highs.

But if the fail to run those stops and just dip into the mid-high 4100's instead then the chances of a new high are slim as you can't do a massive rally up with so many bulls long the market.

It would tell me that all we are going to see is a short squeeze on the bears into the FOMC on May the 4th to setup another even larger drop... possibly a crash. I say that because the market has been in a large triangle pattern since January and it's tested the lower trendline (in dashed blue) 3 times already with this possible Wave 5 down into the 4100's being test number 4. The upside falling trendline (in solid red) only has two points, the 4808 all time high and the 4631 high on 3/29... which is clear weakness obviously.

This next rally up MUST take it out and I really have my doubts on that happening. The Fed has remained very "hawkish" on these interest rate increases and unless by some miracle they flip to "dovish" at next Wednesday FOMC I'm afraid any rally up into it will be reversed. I'd preferred to see a bottom going into the meeting like we are doing right now.

That way they could have pierced the 4101 low to run the stops briefly on the bulls and the Fed could have saved the day with something said positive... and the mega-rally would be on! But I'm afraid all dreams of this Medium Wave 3 up inside Large Wave 5 up, to 6000+ are FINISHED! Odds of this happening now are super low. They are setting this market up for a HUGE drop after the Fed as this sell off it too early. It will bottom today or tomorrow and we'll see a strong rally into May 4th where nothing positive will be said, which will cause the next drop to start.

Only problem is the next drop will take out the triangle support and fall off a cliff. It's been really frustrating to see the bulls fail and fail and fail to get anything going over the past several months.

But I'm afraid time has run out for them. I do not see them taking out the falling red trendline (and 4631) on the next rally unless the Fed becomes a super hero. And since we have a week and a half left odds point to them rallying up into the meeting as opposed to bottoming... not good for the bulls. The short term charts are of course oversold right now, which supports the rally into May 4th... but by then the same short term charts will be overbought.

You can't get a short squeeze going on overbought charts. You need to bottom into the meeting, but I don't think they will. The biggest problem in on the larger time frame... the monthly chart! It's very bearish right now with NO Positive Divergence. It had a positive divergence after the 2020 crash that was created from 2018 but the mega-rally we've had since then has been straight up with no breather at all.

The weekly chart bounced back up with the rally to 4631 and has turned back down now and is NOT showing any signs of turning back up yet. The daily chart is close to oversold, which is why I'm saying the odds are strong that we'll bottom today or tomorrow and rally into the FOMC meeting next week.

The bottom line here is that I no longer think a new all time high is possible right now. The expected rally into the Fed meeting will likely be the last before the triangle breaks down and a super large drop happens. Have a blessed day.