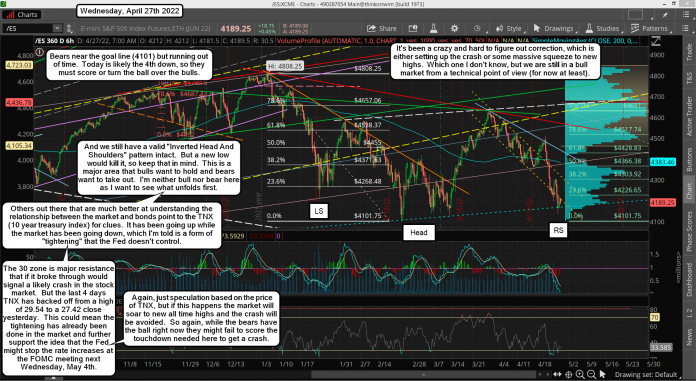 Every bounce has failed as all the bulls remain trapped and the bears keep piling in short. I thought we would see an ABC rally up but all we got was a one day wonder rally that was completely erased with yesterdays bloodbath.

We still haven't taken out the 4101 low, so that still remains the last "line the sand" for the bulls I think.  If it goes then bear market will likely be here and the bull market dead.  They will hit all those stops the bulls have placed under that level (if they go 50-100 points below it), and then a squeeze can start on the bears. That will then look a lot like the first low in 2020 for what was an A wave before a 3 day rally of 50% (the B wave)... then the crash afterwards. There's no way to know for sure if this repeats and if we are going to crash or not as they make it super tricky.

Holding above that 4101 low is major for the bull case, so let's see how it plays out today and the rest of week first.  If we take out that low today then I'd look for that big squeeze of 50% to happen into this Friday and/or next Monday. That will be where the big decision is made. Will the market continue higher afterwards with new all time highs on tap or will it rollover and crash?

A powerful rally like that to get the bears out will likely lead to a lot of bulls calling for a successful double bottom low to be put in... and I can't blame them as that will be the textbook pattern that works in all bull markets. But if that low is taken out then I'm not sure if we are still in a bull market or a bear market?

That's the hardest question here, and one I really can't answer.  If you are a bull then root for it NOT to get taken out, and then your answer is simple... yes, we are still in a bull market.  It only becomes "unknown" if it's taken out.  Remember that the Fed could save the day next Wednesday by canceling all future rate hikes, and then the market should rip... right?

That's all speculation of course, as we just don't know.  What I see from a technical point of view is that we had plenty of capitulation volume yesterday to support a strong rally starting today that doesn't have to take out the 4101 low.  And by NOT doing that there will be many new bears going short on the rally up that will be looking for that low to be taken out... which is fuel to keep going up higher then most think.

I did the chart below yesterday after the close and based it on the low being taken out and a short squeeze happening (like the 50% rally in 2020 before the crash).  There are two areas of resistance going up as you can see on it that should stop the rally on the first hit.  The down arrows are pointing to a new lower low... like the start of the crash. 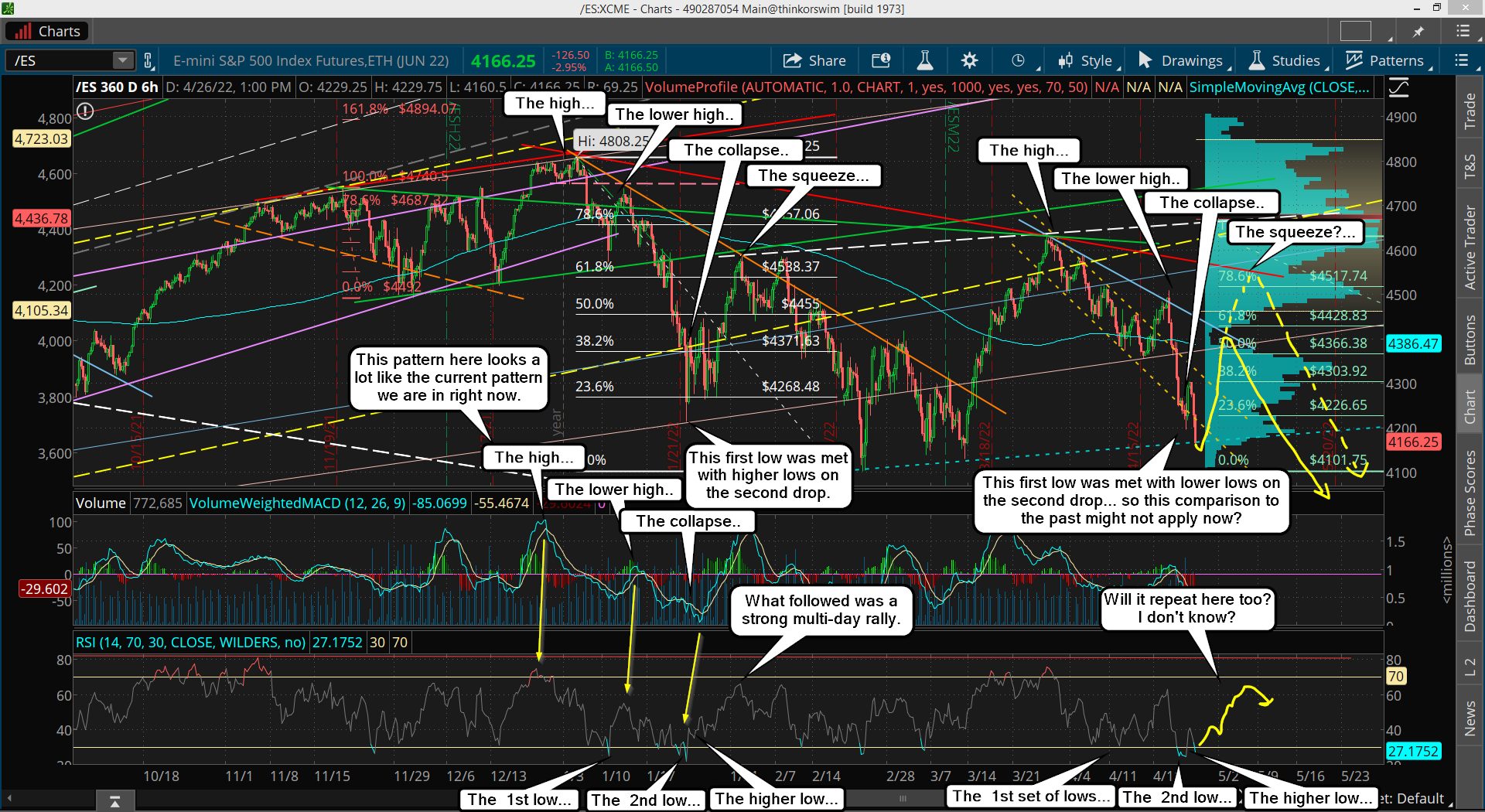 But... if we do NOT take out the current low then the bull market is still intact and odds for the crash go down big time.  The move up into resistance will probably be met with only a small pullback to keep bears trapped just like they did small bounces the last few weeks to keep bulls trapped.  The reverse should happen on the move back up.

So you can ignore the down arrows pointing to new lower lows as if 4101 holds I'll be canceling my thoughts on a crash and sticking with the bullish case for new all time highs coming soon.  There's going to be a ton of fuel from here on out for them to squeeze it up that high as again... NEW Bears will short this market day after day looking for that rollover that goes back down to take out the current low.  It should never happen like that... meaning it must take it out today/tomorrow or else it's likely over for the bears.

I know this sounds like I'm flip flopping here, and I am... but ONLY based on what the market gives me.  Give me a new lower low and I'll still remain bearish and will be looking for a 50% rally like back in 2020.  Hold the current low and I'm still a bull.

In a previous post I spoke about the monthly chart being bearish and looking like it's going to rollover, which is still true, but it's a large time frame chart so we could go back up for months and make higher highs in the market with its' MACD's rolling over and going down.  This would be a divergence, which we are missing right now.  I guess on such a large time frame you don't have to create a negative divergence, which is more common on the daily and weekly, but it would be nice to see one for sure.