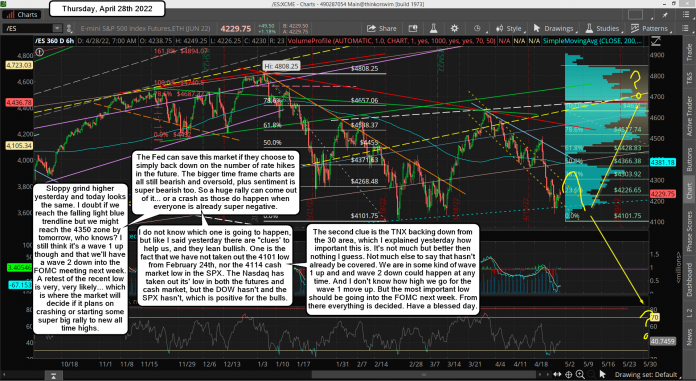 Sloppy grind higher yesterday and today looks the same. I doubt if we reach the falling light blue trendline but we might reach the 4350 zone by tomorrow, who knows? I still think it's a wave 1 up though and that we'll have a wave 2 down into the FOMC meeting next week. A retest of the recent low is very, very likely... which is where the market will decide if it plans on crashing or starting some super big rally to new all time highs.

The Fed can save this market if they choose to simply back down on the number of rate hikes in the future. The bigger time frame charts are all still bearish and oversold, plus sentiment is super bearish too. So a huge rally can come out of it... or a crash as those do happen when everyone is already super negative.

I do not know which one is going to happen, but like I said yesterday there are "clues' to help us, and they lean bullish. One is the fact that we have not taken out the 4101 low from February 24th, nor the 4114 cash market low in the SPX. The Nasdaq has taken out its' low in both the futures and cash market, but the DOW hasn't and the SPX hasn't, which is positive for the bulls.

The second clue is the TNX backing down from the 30 area, which I explained yesterday how important this is. It's not much but better then nothing I guess. Not much else to say that hasn't already be covered. We are in some kind of wave 1 up and and wave 2 down could happen at any time. And I don't know how high we go for the wave 1 move up. But the most important low should be going into the FOMC next week. From there everything is decided. Have a blessed day.