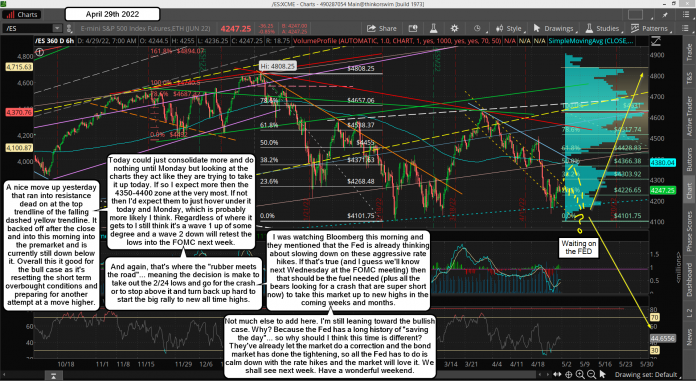 A nice move up yesterday that ran into resistance dead on at the top trendline of the falling dashed yellow trendline. It backed off after the close and into this morning into the premarket and is currently still down below it. Overall this it good for the bull case as it's resetting the short term overbought conditions and preparing for another attempt at a move higher.

Today could just consolidate more and do nothing until Monday but looking at the charts they act like they are trying to take it up today. If so I expect more then the 4350-4400 zone at the very most. If not then I'd expect them to just hover under it today and Monday, which is probably more likely I think. Regardless of where it gets to I still think it's a wave 1 up of some degree and a wave 2 down will retest the lows into the FOMC next week.

And again, that's where the "rubber meets the road"... meaning the decision is make to take out the 2/24 lows and go for the crash or to stop above it and turn back up hard to start the big rally to new all time highs.

I was watching Bloomberg this morning and they mentioned that the Fed is already thinking about slowing down on these aggressive rate hikes. If that's true (and I guess we'll know next Wednesday at the FOMC meeting) then that should be the fuel needed (plus all the bears looking for a crash that are super short now) to take this market up to new highs in the coming weeks and months.

Not much else to add here. I'm still leaning toward the bullish case. Why? Because the Fed has a long history of "saving the day"... so why should I think this time is different? They've already let the market do a correction and the bond market has done the tightening, so all the Fed has to do is calm down with the rate hikes and the market will love it. We shall see next week. Have a wonderful weekend.