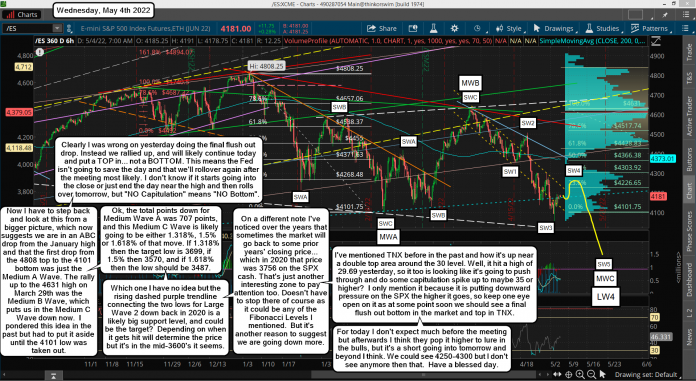 Clearly I was wrong on yesterday doing the final flush out drop. Instead we rallied up, and will likely continue today and put a TOP in... not a BOTTOM. This means the Fed isn't going to save the day and that we'll rollover again after the meeting most likely. I don't know if it starts going into the close or just end the day near the high and then rolls over tomorrow, but "NO Capitulation" means "NO Bottom".

Now I have to step back and look at this from a bigger picture, which now suggests we are in an ABC drop from the January high and that the first drop from the 4808 top to the 4101 bottom was just the Medium A Wave. The rally up to the 4631 high on March 29th was the Medium B Wave, which puts us in the Medium C Wave down now.  I pondered this idea in the past but had to put it aside until the 4101 low was taken out.

Which one I have no idea but the rising dashed purple trendline connecting the two lows for Large Wave 2 down back in 2020 is a likely big support level, and could be the target?  Depending on when it gets hit will determine the price but it's in the mid-3600's it seems.

On a different note I've noticed over the years that sometimes the market will go back to some prior years' closing price... which in 2020 that price was 3756 on the SPX cash. That's just another interesting zone to pay attention too. Doesn't have to stop there of course as it could be any of the Fibonacci Levels I mentioned.  But it's another reason to suggest we are going down more.

I've mentioned TNX before in the past and how it's up near a double top area around the 30 level. Well, it hit a high of 29.69 yesterday, so it too is looking like it's going to push through and do some capitulation spike up to maybe 35 or higher?  I only mention it because it is putting downward pressure on the SPX the higher it goes, so keep one eye open on it as at some point soon we should see a final flush out bottom in the market and top in TNX.

For today I don't expect much before the meeting but afterwards I think they pop it higher to lure in the bulls, but it's a short going into tomorrow and beyond I think. We could see 4250-4300 but I don't see anymore then that.  Have a blessed day.