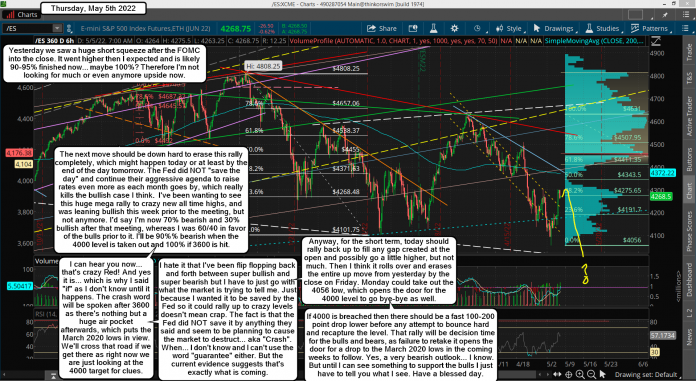 Yesterday we saw a huge short squeeze after the FOMC into the close. It went higher then I expected and is likely 90-95% finished now... maybe 100%? Therefore I'm not looking for much or even anymore upside now.

The next move should be down hard to erase this rally completely, which might happen today or at least by the end of the day tomorrow. The Fed did NOT "save the day" and continue their aggressive agenda to raise rates even more as each month goes by, which really kills the bullish case I think.  I've been wanting to see this huge mega rally to crazy new all time highs, and was leaning bullish this week prior to the meeting, but not anymore. I'd say I'm now 70% bearish and 30% bullish after that meeting, whereas I was 60/40 in favor of the bulls prior to it. I'll be 90%% bearish when the 4000 level is taken out and 100% if 3600 is hit. 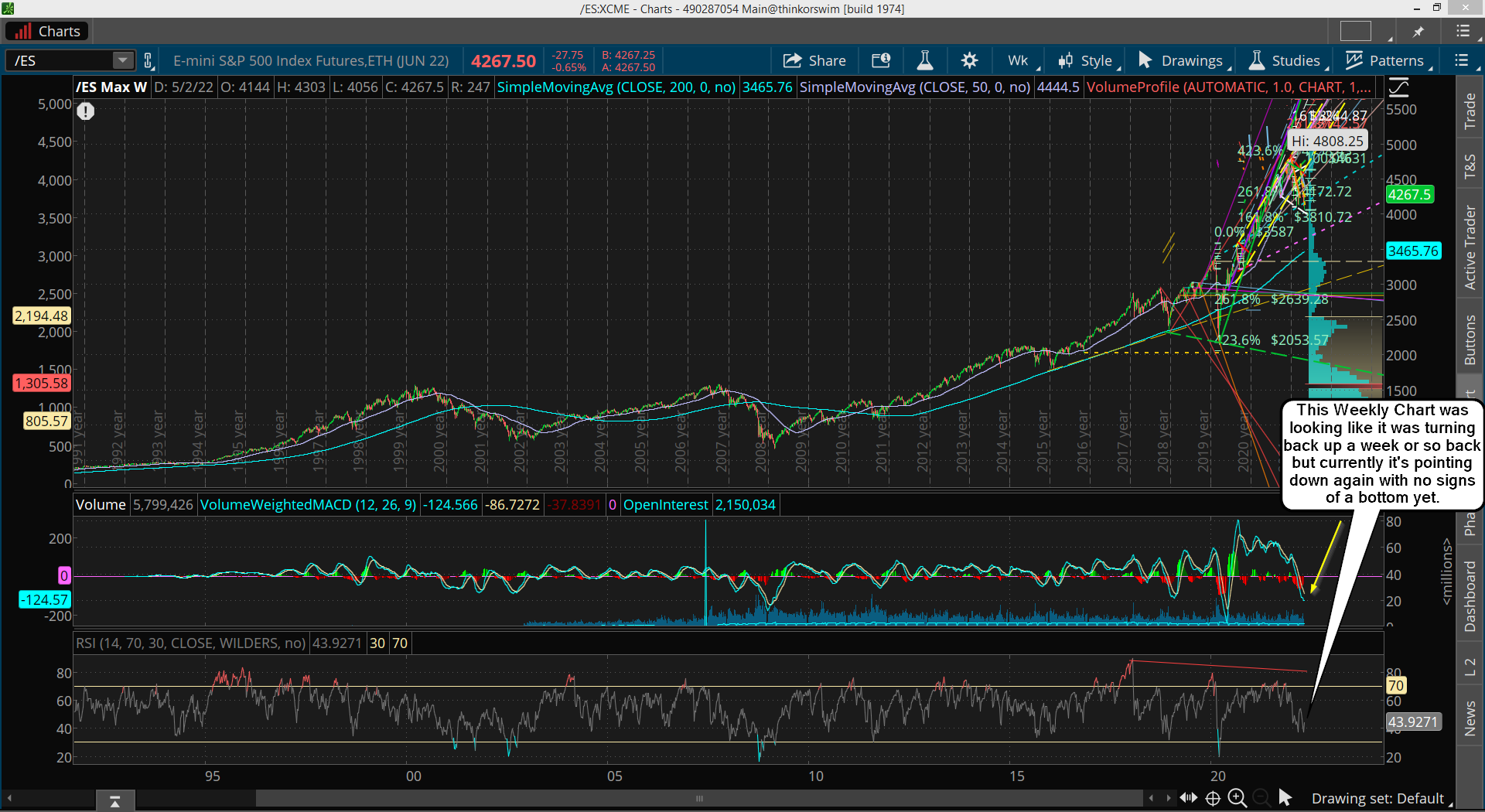 I can hear you now... that's crazy Red! And yes it is... which is why I said "if" as I don't know until it happens. The crash word will be spoken after 3600 as there's nothing but a huge air pocket afterwards, which puts the March 2020 lows in view. We'll cross that road if we get there as right now we are just looking at the 4000 target for clues.

I hate it that I've been flip flopping back and forth between super bullish and super bearish but I have to just go with what the market is trying to tell me. Just because I wanted it to be saved by the Fed so it could rally up to crazy levels doesn't mean crap. The fact is that the Fed did NOT save it by anything they said and seem to be planning to cause the market to destruct... aka "Crash". When... I don't know and I can't use the word "guarantee" either. But the current evidence suggests that's exactly what is coming. 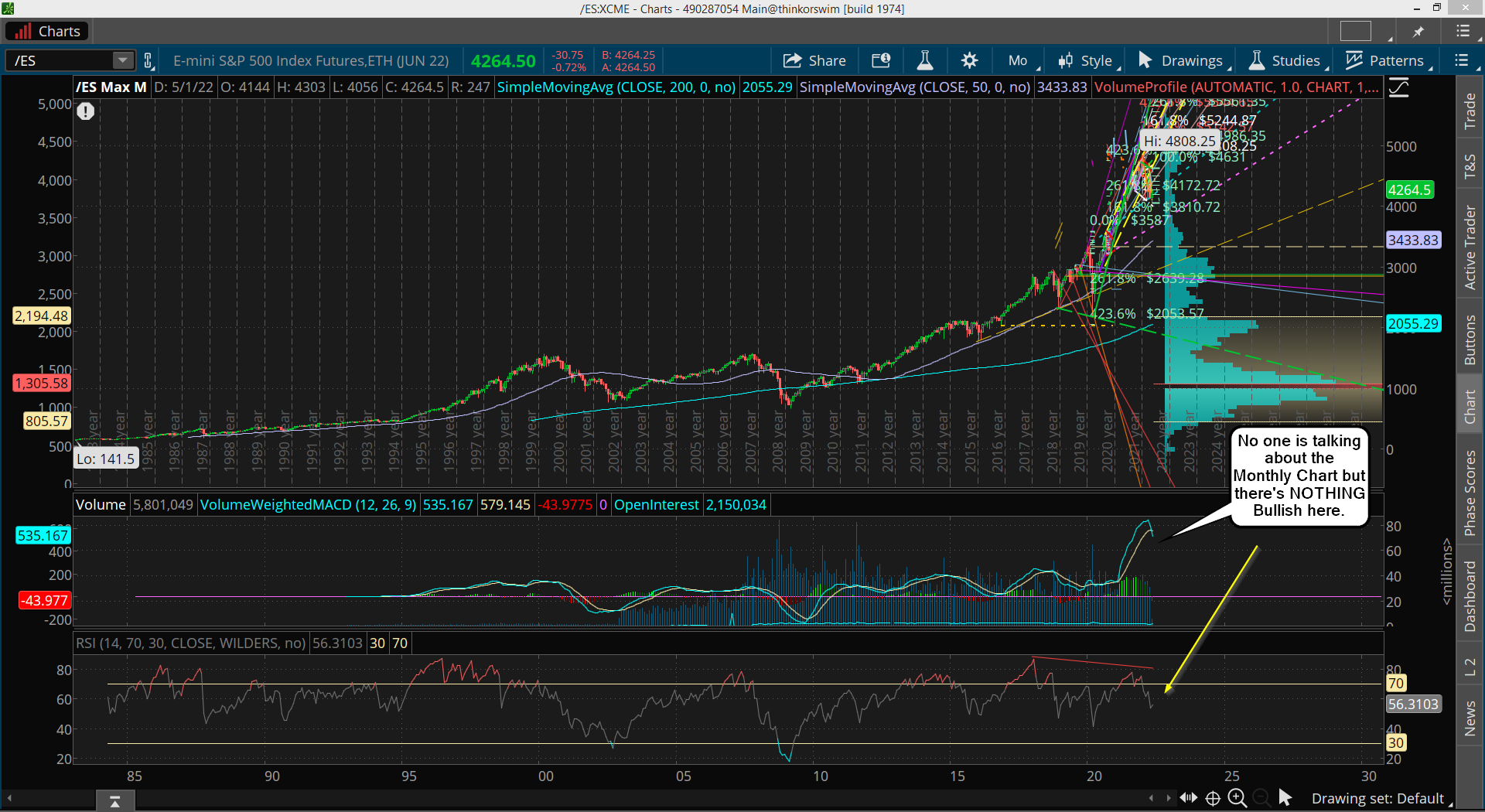 Anyway, for the short term, today should rally back up to fill any gap created at the open and possibly go a little higher, but not much. Then I think it rolls over and erases the entire up move from yesterday by the close on Friday. Monday could take out the 4056 low, which opens the door for the 4000 level to go bye-bye as well.

If 4000 is breached then there should be a fast 100-200 point drop lower before any attempt to bounce hard and recapture the level. That rally will be decision time for the bulls and bears, as failure to retake it opens the door for a drop to the March 2020 lows in the coming weeks to follow. Yes, a very bearish outlook... I know. But until I can see something to support the bulls I just have to tell you what I see. Have a blessed day.