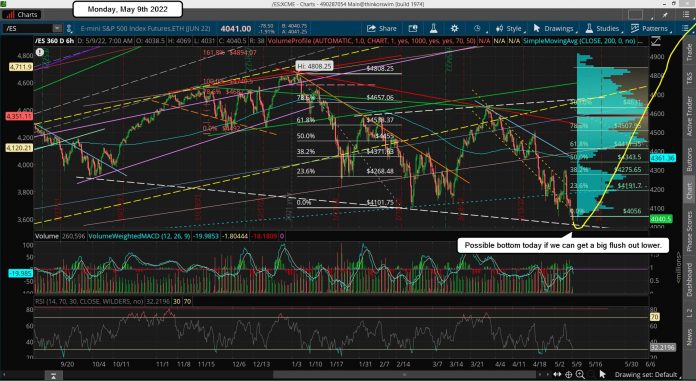 I did some deep thinking over the weekend to try and figure out why I've been flip flopping between bullish and bearish recently. I've come to the conclusion that's it's because we are at a major inflection point where either a huge drop happens or a final bottom is put in, which leads to a massive rally.

On one hand I have plenty of super bearish charts to support a massive drop, but on the other hand I have extreme bearish sentiment that is now lower then the March 2020 low. So I thought back to all my past history of huge drops and tried to remember if the masses were super bearish at the time or bullish (meaning it took them by surprise), and I have to say that I can't remember any period where everyone was so bearish in FRONT of a large drop. In fact every one I could remember where drops that came when people were bullish or at least neutral.

I feel like I've been in this spot too many times in the past where you look at the charts to read the technicals, which are all (again) super bearish, and in each time some miracle turn back up happened that I kept trying to short as it went higher and higher, inch by inch until a new high was put in and I gave up. I also have to look at the time period for all the prior big drops and every one of them that I could remember were short in time and came out of nowhere.

I can't find any large decline in the past that happened after a 5 month correction, which is what we have going on right now. And last week we had the big squeeze on FOMC day that was followed by a full retracement the next day... which continued on Friday. Now we see it continued with the Sunday night futures too, which is clearly wiping out all the bulls right now. And I noticed a lot of others that expected the "pop" after the Fed and the "drop" the following day too. That begs to wonder that if so many other seen it, and likely short it, then how can that be correct?

We all know that the market always kills the masses and rewards the few, so I'm not comfortable being in the boat with all the bears right now. I'm not sure what's coming but I'm going to go against my own self and flip back to bullish here because the masses are bearish. This smells of a setup, a trap, and NOT on the bulls but on the BEARS!

And the open this Monday morning is more of a continuation of the futures on Sunday night.  So my thoughts here are that we need to just flush it out today and then (and only then) can we put in a bottom that can be bought.  I'd love to see a pierce of 4000 to kill the last bull and lure in the last bear.  Give me that and I'll say the bottom is "in" and we are off to new all time highs.

But it needs to happen today, meaning we can't see any bounce of any significances that allows trapped bulls to exit and then flush it down tomorrow.  That won't work as we need them to capitulate here and that requires them to remain trapped.

Ok, so in summary here "today" could put in the lows.  I'd like too see at least the 4020's to be entered but preferably a pierce of 4000.  Then I'm a huge bull again.  Otherwise I'm just waiting and watching.  Have a blessed day.