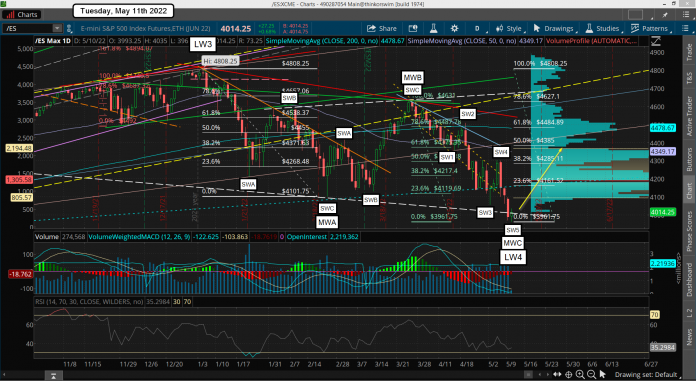 Monday, bloody Monday! We did indeed get the flush out drop I was looking for yesterday with the futures and the cash dropping below the 4000 level. I wrote up most of that morning update on Sunday, which was great because I was without internet until shortly after the open yesterday... hence the late post.

Ok, so where are we now? This morning we do see a bounce which is normal after such a drop, and I'm sure many will be looking to short it. For me I think we've seen capitulation and from here on out we will be going up. The drop back in 2020 between September 2nd and September 24th was from 3587 to 3198, or 389 points for Medium Wave A inside Large Wave 2 down.

Then we rallied to 3541 into October 12th for the Medium B Wave, which was followed by the Medium C Wave down into October 30th where it hit a low of 3225 and was 316 points in total. That C wave was shorter then the A wave and was 0.81% of it, which is more common in bull markets.

In true bear markets you see a 1.618% up to 2.618% extension for the C wave compared to the A wave... which clearly we aren't in right now. The entire Large Wave 2 back then lasted 2 months and currently we are at the 5 month mark for this Large Wave 4 correction, which is over twice as long as the 2 wave.

Why you wonder? No one really knows but I speculate that everyone can look back at the clean looking ABC for Large Wave 2 and saw what happened afterwards. So when we had another clean ABC down recently from the January 4th, 2022 high to the February 24th low the masses got all bulled up and mega long expecting another huge rally like all of 2021.

Plus the time period was again about 2 months in total. You can see pretty clearly now why everything looked perfect for a repeat of the prior correction and why I wasn't the only one that saw it and go long.

Naturally SkyNet also saw everyone getting long and had other plans. The market never rewards the masses but instead rewards the few. So it did another ABC drop over another couple of months to shake out those bulls and get them all super bearish and looking for a crash. Well, I think it's done a great job of that right now as many are looking for a crash now it seems.

Can it happen? Sure, but it's not something you can predict. Crashes come out of nowhere when the sentiment is already super bearish, which is where we are right now.

But they don't usually happen in the third year of a presidential cycle. I've covered this previously but here's a simple refresher. Crashes, Recessions, and Depressions almost always happen in between presidents. They are when one is exiting and another one coming in... which means the years 2023-2025 are the most likely period for this market to go through one of them.

We are currently in the 3rd year of the idiot in the basement so odds are super low they allow a crash now. But next year he's leaving and going to a nursing home (or prison hopefully) so the market should be at its' peak by the first or second quarter of 2023. Then the plug is pulled and everything falls apart as he's leaving.

This pattern happens over and over so I do not expect it to change and fully think this correction is over now (or super close) and that there will be NO Crash now. We should start going up soon (ideally today) and it should be slow at first to keep the bears shorting it.

A slow and suttle move is advance higher is way better for the bulls here as it keeps everyone thinking it's going to rollover at some upside resistance level. But it can grind through it with all the fuel from the new bears shorting it, and I think that is exactly what's going to happen over the next several weeks.

I'm not looking for a one week face ripper to new all time highs like we saw happen after the October 30th 2020 bottom, but instead I think we get a meat grinder move on the bears. In conclusion, I think the bottom is in now, or 98% of the down move is over with (meaning we might bounce a few days and retest the low). Have a blessed day.