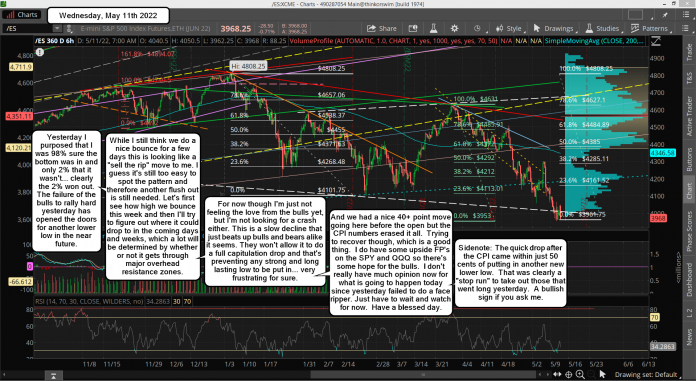 Yesterday I purposed that I was 98% sure the bottom was in and only 2% that it wasn't... clearly the 2% won out. The failure of the bulls to rally hard yesterday has opened the doors for another lower low in the near future.

While I still think we do a nice bounce for a few days this is looking like a "sell the rip" move to me. I guess it's still too easy to spot the pattern and therefore another flush out is still needed. Let's first see how high we bounce this week and then I'll try to figure out where it could drop to in the coming days and weeks, which a lot will be determined by whether or not it gets through major overhead resistance zones.

For now though I'm just not feeling the love from the bulls yet, but I'm not looking for a crash either. This is a slow decline that just beats up bulls and bears alike it seems. They won't allow it to do a full capitulation drop and that's preventing any strong and long lasting low to be put in... very frustrating for sure.

And we had a nice 40+ point move going here before the open but the CPI numbers erased it all.  Trying to recover though, which is a good thing.  I do have some upside FP's on the SPY and QQQ so there's some hope for the bulls.  I don't really have much opinion now for what is going to happen today since yesterday failed to do a face ripper. Just have to wait and watch for now.  Have a blessed day.

Sidenote: The quick drop after the CPI came within just 50 cents of putting in another new lower low. That was clearly a "stop run" to take out those that went long yesterday. A bullish sign if you ask me.