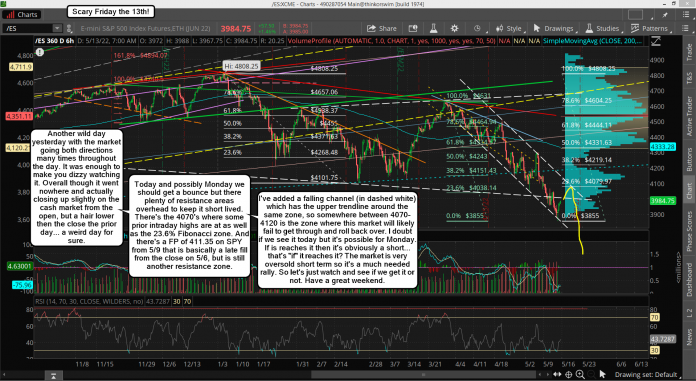 Another wild day yesterday with the market going both directions many times throughout the day. It was enough to make you dizzy watching it. Overall though it went nowhere and actually closing up slightly on the cash market from the open, but a hair lower then the close the prior day... a weird day for sure.

Today and possibly Monday we should get a bounce but there plenty of resistance areas overhead to keep it short lived. There's the 4070's where some prior intraday highs are at as well as the 23.6% Fibonacci zone. And there's a FP of 411.35 on SPY from 5/9 that is basically a late fill from the close on 5/6, but is still another resistance zone.

I've added a falling channel (in dashed white) which has the upper trendline around the same zone, so somewhere between 4070-4120 is the zone where this market will likely fail to get through and roll back over. I doubt if we see it today but it's possible for Monday. If is reaches it then it's obviously a short... that's "if" it reaches it? The market is very oversold short term so it's a much needed rally. So let's just watch and see if we get it or not. Have a great weekend.