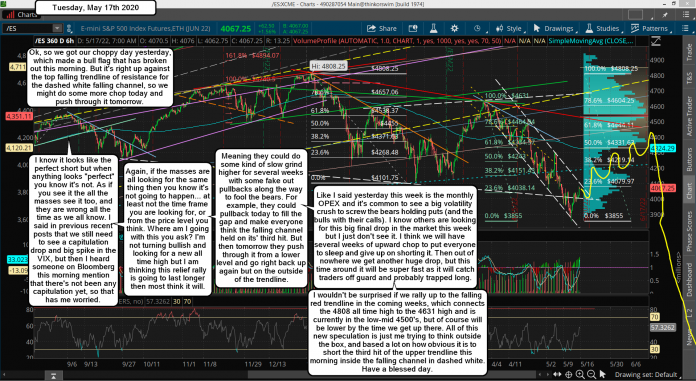 Ok, so we got our choppy day yesterday, which made a bull flag that has broken out this morning. But it's right up against the top falling trendline of resistance for the dashed white falling channel, so we might do some more chop today and push through it tomorrow.

I know it looks like the perfect short but when anything looks "perfect" you know it's not. As if you see it the all the masses see it too, and they are wrong all the time as we all know. I said in previous recent posts that we still need to see a capitulation drop and big spike in the VIX, but then I heard someone on Bloomberg this morning mention that there's not been any capitulation yet, so that has me worried.

Again, if the masses are all looking for the same thing then you know it's not going to happen... at least not the time frame you are looking for, or from the price level you think. Where am I going with this you ask? I'm not turning bullish and looking for a new all time high but I am thinking this relief rally is going to last longer then most think it will.

Meaning they could do some kind of slow grind higher for several weeks with some fake out pullbacks along the way to fool the bears. For example, they could pullback today to fill the gap and make everyone think the falling channel held on its' third hit. But then tomorrow they push through it from a lower level and go right back up again but on the outside of the trendline.

Like I said yesterday this week is the monthly OPEX and it's common to see a big volatility crush to screw the bears holding puts (and the bulls with their calls). I know others are looking for this big final drop in the market this week but I just don't see it. I think we will have several weeks of upward chop to put everyone to sleep and give up on shorting it. Then out of nowhere we get another huge drop, but this time around it will be super fast as it will catch traders off guard and probably trapped long.

I wouldn't be surprised if we rally up to the falling red trendline in the coming weeks, which connects the 4808 all time high to the 4631 high and is currently in the low-mid 4500's, but of course will be lower by the time we get up there. All of this new speculation is just me trying to think outside the box, and based a lot on how obvious it is to short the third hit of the upper trendline this morning inside the falling channel in dashed white. Have a blessed day.