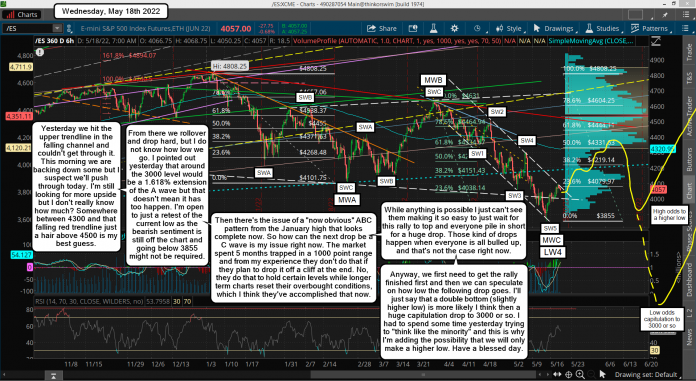 Yesterday we hit the upper trendline in the falling channel and couldn't get through it. This morning we are backing down some but I suspect we'll push through today. I'm still looking for more upside but I don't really know how much? Somewhere between 4300 and that falling red trendline just a hair above 4500 is my best guess.

From there we rollover and drop hard, but I do not know how low we go. I pointed out yesterday that around the 3000 level would be a 1.618% extension of the A wave but that doesn't mean it has too happen. I'm open to just a retest of the current low as the bearish sentiment is still off the chart and going below 3855 might not be required.

Then there's the issue of a "now obvious" ABC pattern from the January high that looks complete now. So how can the next drop be a C wave is my issue right now. The market spent 5 months trapped in a 1000 point range and from my experience they don't do that if they plan to drop it off a cliff at the end. No, they do that to hold certain levels while longer term charts reset their overbought conditions, which I think they've accomplished that now.

While anything is possible I just can't see them making it so easy to just wait for this rally to top and everyone pile in short for a huge drop. Those kind of drops happen when everyone is all bulled up, and that's not the case right now.

Anyway, we first need to get the rally finished first and then we can speculate on how low the following drop goes. I'll just say that a double bottom (slightly higher low) is more likely I think then a huge capitulation drop to 3000 or so. I had to spend some time yesterday trying to "think like the minority" and this is why I'm adding the possibility that we will only make a higher low. Have a blessed day.