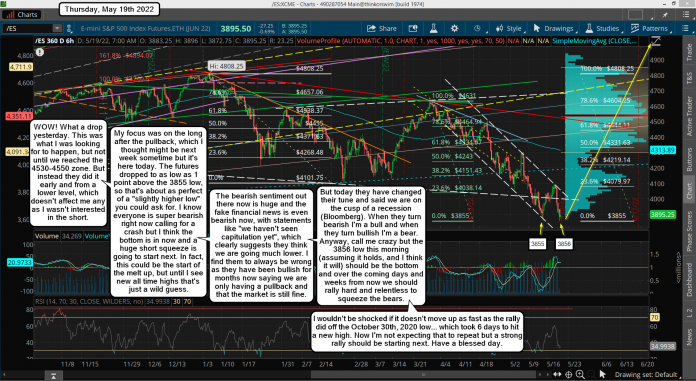 WOW! What a drop yesterday. This was what I was looking for to happen, but not until we reached the 4530-4550 zone. But instead they did it early and from a lower level, which doesn't affect me any as I wasn't interested in the short.

My focus was on the long after the pullback, which I thought might be next week sometime but it's here today. The futures dropped to as low as 1 point above the 3855 low, so that's about as perfect of a "slightly higher low" you could ask for. I know everyone is super bearish right now calling for a crash but I think the bottom is in now and a huge short squeeze is going to start next. In fact, this could be the start of the melt up, but until I see new all time highs that's just a wild guess.

The bearish sentiment out there now is huge and the fake financial news is even bearish now, with statements like "we haven't seen capitulation yet", which clearly suggests they think we are going much lower. I find them to always be wrong as they have been bullish for months now saying we are only having a pullback and that the market is still fine.

But today they have changed their tune and said we are on the cusp of a recession (Bloomberg). When they turn bearish I'm a bull and when they turn bullish I'm a bear. Anyway, call me crazy but the 3856 low this morning (assuming it holds, and I think it will) should be the bottom and over the coming days and weeks from now we should rally hard and relentless to squeeze the bears.

I wouldn't be shocked if it doesn't move up as fast as the rally did off the October 30th, 2020 low... which took 6 days to hit a new high. Now I'm not expecting that to repeat but a strong rally should be starting next. Have a blessed day.