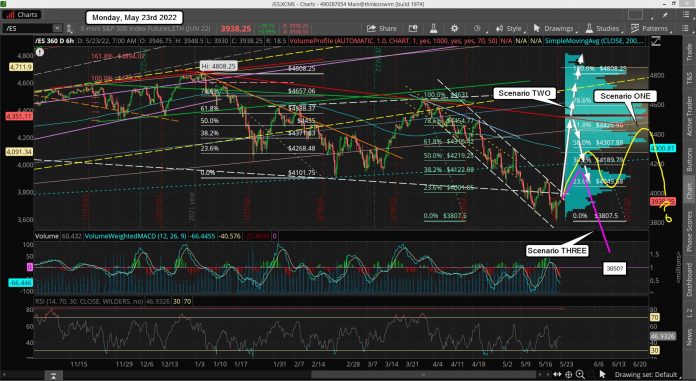 Another crazy week we had with the nuttiest move on last Friday it seems. That late day reversal took everyone by surprise and I'm certainly not sure what it was? Meaning I don't know if that was the bottom and real buying coming in or just some manipulation move due to OPEX. Only time will tell I guess.

This morning that move up is continuing but it's a long ways up so nothing to get excited about yet as there are tons of resistance levels that could seen it back down hard. From a technical point of view, and logical one, a multi-week rally up to the falling dark red trendline just under 4500 would be the ideal target. This was my original target from last Monday the 16th when the market looked bottomed back then and was hitting the upper dashed white trendline in the falling channel.

I thought it would pullback small and then push through it to rally up to the dark red trendline where then it would rollover and do the nasty and scary drop that we saw last week. Obviously I was wrong as they didn't give us that rally and ideal shorting spot. Instead they tanked it the rest of the week and made another new lower low at 3807.50 on the futures and 3810.32 on the SPX cash.

I think most traders and forecasters are looking for a bounce from here that can last from one week to four weeks, but none (that I read) are looking for new highs. If the crowd is right then we'll rally up this week and possibly several weeks with a goal of hitting that falling dark red trendline.

A common pattern would be an ABC move up where we do the A wave over the next several days and possibly top around the 4200 zone. Then the B wave down for a higher low, like say into the 3900-4000 zone. Then the C wave up to "just over 4400" as by the time it does that last move the dark red trendline will be lower. This could take us into mid-June. This is the expected move I suspect and most common one.

The unexpected move would be a straight up rally, closing green day after day with only intraday wild swings. From a "typical" point of view I'd say that if that happened that when we hit the dark red falling trendline of resistance the market would be very overbought on the short term and should rollover hard.

My gut will tell me it's "too easy" and that everyone will see it and short it... therefore it won't rollover but use those new shorts for fuel to squeeze up through it with new highs in play. I'd likely be alone making that call of course.

Thirdly we might do neither scenario and just do a bounce to 4100-4200 and rollover again and go for the FP on the SPY that's (again) around 3650 on the SPX. I can't see it going lower then that so I won't even talk about it until we first hit that zone.

Another clue to suggest they do want to go down there is that the yearly close for 2020 was 3756 on SPX, and we got really close last Friday at that 3810 low.  Sometimes the market likes to go back to a recent years' close and/or the open and that might be why the FP on the SPY picked that target low?

Anyway, all three of the scenario's are what's on the table I think. Which one plays out I just don't know? Let's give it some time to try and narrow down the options. Have a blessed day.