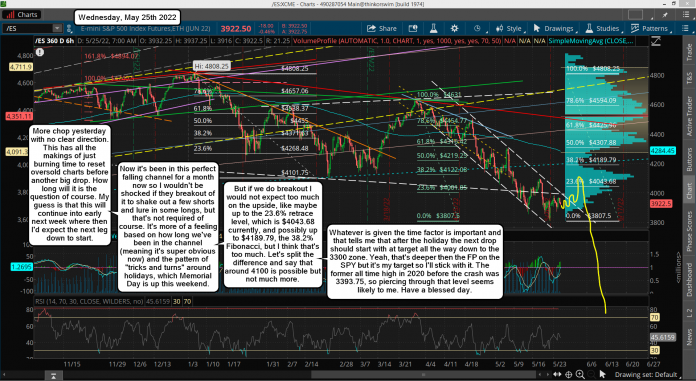 More chop yesterday with no clear direction. This has all the makings of just burning time to reset oversold charts before another big drop. How long will it is the question of course. My guess is that this will continue into early next week where then I'd expect the next leg down to start.

Now it's been in this perfect falling channel for a month now so I wouldn't be shocked if they breakout of it to shake out a few shorts and lure in some longs, but that's not required of course. It's more of a feeling based on how long we've been in the channel (meaning it's super obvious now) and the pattern of "tricks and turns" around holidays, which Memorial Day is up this weekend.

Whatever is given the time factor is important and that tells me that after the holiday the next drop should start with at target all the way down to the 3300 zone. Yeah, that's deeper then the FP on the SPY but it's my target so I'll stick with it. The former all time high in 2020 before the crash was 3393.75, so piercing through that level seems likely to me. Have a blessed day.