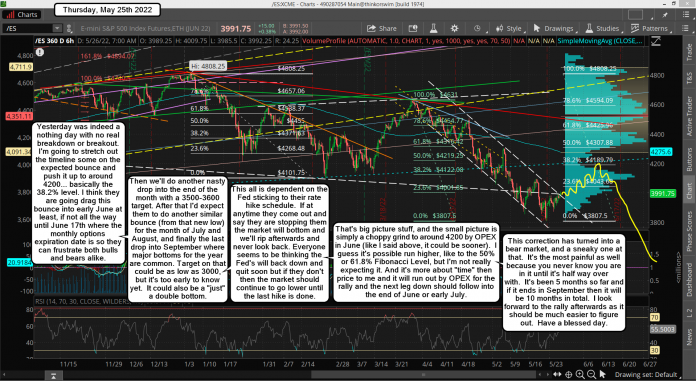 Yesterday was indeed a nothing day with no real breakdown or breakout. I'm going to stretch out the timeline some on the expected bounce and push it up to around 4200... basically the 38.2% level. I think they are going drag this bounce into early June at least, if not all the way until June 17th where the monthly options expiration date is so they can frustrate both bulls and bears alike.

Then we'll do another nasty drop into the end of the month with a 3500-3600 target. After that I'd expect them to do another similar bounce (from that new low) for the month of July and August, and finally the last drop into September where major bottoms for the year are common. Target on that could be as low as 3000, but it's too early to know yet.  It could also be a "just" a double bottom.

This all is dependent on the Fed sticking to their rate hike schedule.  If at anytime they come out and say they are stopping them the market will bottom and we'll rip afterwards and never look back. Everyone seems to be thinking the Fed's will back down and quit soon but if they don't then the market should continue to go lower until the last hike is done.

That's big picture stuff, and the small picture is simply a choppy grind to around 4200 by OPEX in June (like I said above, it could be sooner).  I guess it's possible run higher, like to the 50% or 61.8% Fibonacci Level, but I'm not really expecting it. And it's more about "time" then price to me and it will run out by OPEX for the rally and the next leg down should follow into the end of June or early July.

This correction has turned into a bear market, and a sneaky one at that.  It's the most painful as well because you never know you are in it until it's half way over with.  It's been 5 months so far and if it ends in September then it will be 10 months in total.  I look forward to the rally afterwards as it should be much easier to figure out.  Have a blessed day.