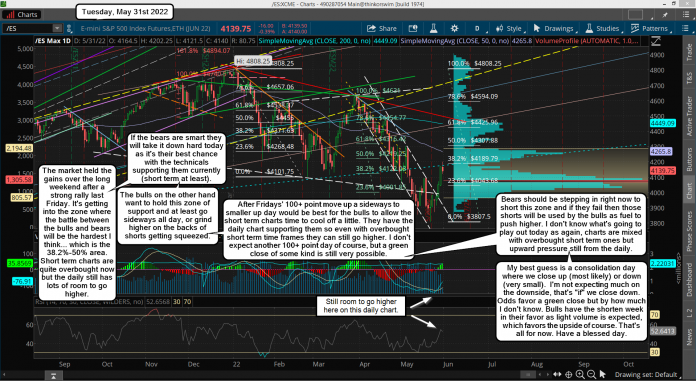 The market held the gains over the long weekend after a strong rally last Friday. It's getting into the zone where the battle between the bulls and bears will be the hardest I think... which is the 38.2%-50% area. Short term charts are quite overbought now but the daily still has lots of room to go higher.

If the bears are smart they will take it down hard today as it's their best chance with the technicals supporting them currently (short term at least).

The bulls on the other hand want to hold this zone of support and at least go sideways all day, or grind higher on the backs of shorts getting squeezed.

After Fridays' 100+ point move up a sideways to smaller up day would be best for the bulls to allow the short term charts time to cool off a little. They have the daily chart supporting them so even with overbought short term time frames they can still go higher. I don't expect another 100+ point day of course, but a green close of some kind is still very possible.

Bears should be stepping in right now to short this zone and if they fail then those shorts will be used by the bulls as fuel to push higher. I don't know what's going to play out today as again, charts are mixed with overbought short term ones but upward pressure still from the daily.

My best guess is a consolidation day where we close up (most likely) or down (very small).  I'm not expecting much on the downside, that's "if" we close down. Odds favor a green close but by how much I don't know. Bulls have the shorten week in their favor as light volume is expected, which favors the upside of course. That's all for now. Have a blessed day.