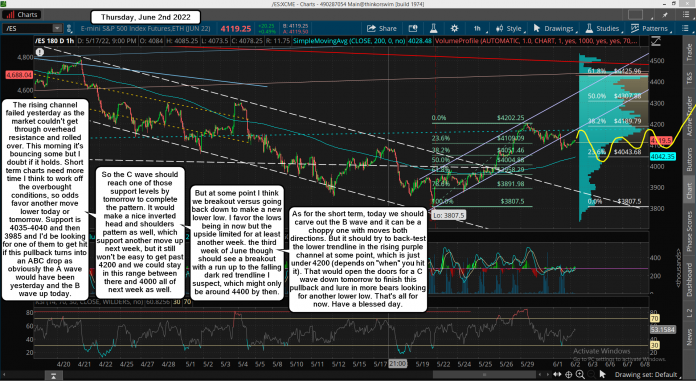 The rising channel failed yesterday as the market couldn't get through overhead resistance and rolled over. This morning it's bouncing some but I doubt if it holds. Short term charts need more time I think to work off the overbought conditions, so odds favor another move lower today or tomorrow. Support is 4035-4040 and then 3985 and I'd be looking for one of them to get hit if this pullback turns into an ABC drop as obviously the A wave would have been yesterday and the B wave up today.

So the C wave should reach one of those support levels by tomorrow to complete the pattern. It would make a nice inverted head and shoulders pattern as well, which support another move up next week, but it still won't be easy to get past 4200 and we could stay in this range between there and 4000 all of next week as well.

But at some point I think we breakout versus going back down to make a new lower low. I favor the lows being in now but the upside limited for at least another week. the third week of June though should see a breakout with a run up to the falling dark red trendline I suspect, which might only be around 4400 by then.

As for the short term, today we should carve out the B wave and it can be a choppy one with moves both directions. But it should try to back-test the lower trendline in the rising purple channel at some point, which is just under 4200 (depends on "when" you hit it). That would open the doors for a C wave down tomorrow to finish this pullback and lure in more bears looking for another lower low. That's all for now. Have a blessed day.