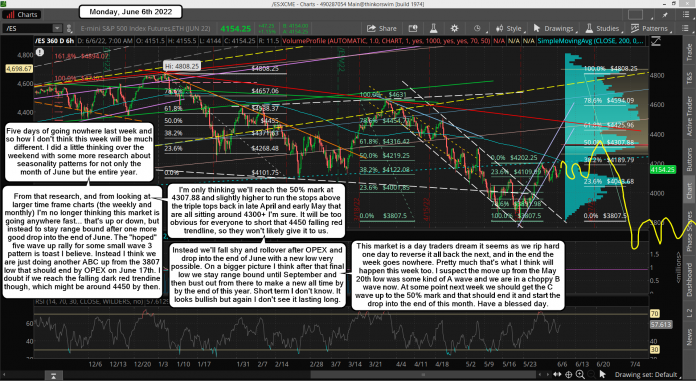 Five days of going nowhere last week and so how I don't think this week will be much different. I did a little thinking over the weekend with some more research about seasonality patterns for not only the month of June but the entire year.

From that research, and from looking at larger time frame charts (the weekly and monthly) I'm no longer thinking this market is going anywhere fast... that's up or down, but instead to stay range bound after one more good drop into the end of June. The "hoped" five wave up rally for some small wave 3 pattern is toast I believe. Instead I think we are just doing another ABC up from the 3807 low that should end by OPEX on June 17th. I doubt if we reach the falling dark red trendine though, which might be around 4450 by then.

I'm only thinking we'll reach the 50% mark at 4307.88 and slightly higher to run the stops above the triple tops back in late April and early May that are all sitting around 4300+ I'm sure. It will be too obvious for everyone to short that 4450 falling red trendline, so they won't likely give it to us.

Instead we'll fall shy and rollover after OPEX and drop into the end of June with a new low very possible. On a bigger picture I think after that final low we stay range bound until September and then bust out from there to make a new all time by by the end of this year. Short term I don't know. It looks bullish but again I don't see it lasting long.

This market is a day traders dream it seems as we rip hard one day to reverse it all back the next, and in the end the week goes nowhere. Pretty much that's what I think will happen this week too. I suspect the move up from the May 20th low was some kind of A wave and we are in a choppy B wave now. At some point next week we should get the C wave up to the 50% mark and that should end it and start the drop into the end of this month. Have a blessed day.