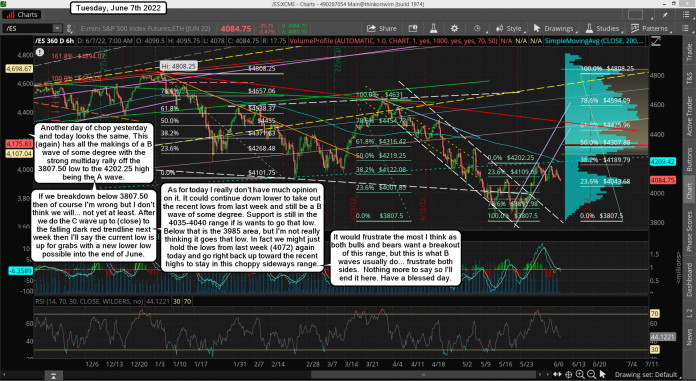 Another day of chop yesterday and today looks the same. This (again) has all the makings of a B wave of some degree with the strong multiday rally off the 3807.50 low to the 4202.25 high being the A wave.

If we breakdown below 3807.50 then of course I'm wrong but I don't think we will... not yet at least. After we do the C wave up to (close) to the falling dark red trendline next week then I'll say the current low is up for grabs with a new lower low possible into the end of June.

As for today I really don't have much opinion on it. It could continue down lower to take out the recent lows from last week and still be a B wave of some degree. Support is still in the 4035-4040 range if is wants to go that low. Below that is the 3985 area, but I'm not really thinking it goes that low. In fact we might just hold the lows from last week (4072) again today and go right back up toward the recent highs to stay in this choppy sideways range.

It would frustrate the most I think as both bulls and bears want a breakout of this range, but this is what B waves usually do... frustrate both sides.  Nothing more to say so I'll end it here. Have a blessed day.