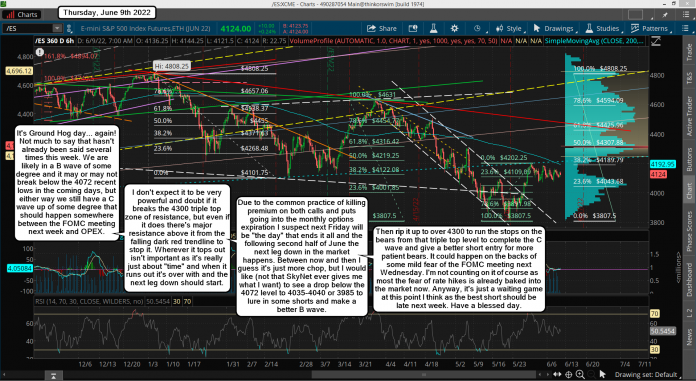 It's Ground Hog day... again! Not much to say that hasn't already been said several times this week. We are likely in a B wave of some degree and it may or may not break below the 4072 recent lows in the coming days, but either way we still have a C wave up of some degree that should happen somewhere between the FOMC meeting next week and OPEX.

I don't expect it to be very powerful and doubt if it breaks the 4300 triple top zone of resistance, but even if it does there's major resistance above it from the falling dark red trendline to stop it. Wherever it tops out isn't important as it's really just about "time" and when it runs out it's over with and the next leg down should start.

Due to the common practice of killing premium on both calls and puts going into the monthly options expiration I suspect next Friday will be "the day" that ends it all and the following second half of June the next leg down in the market happens. Between now and then I guess it's just more chop, but I would like (not that SkyNet ever gives me what I want) to see a drop below the 4072 level to 4035-4040 or 3985 to lure in some shorts and make a better B wave.

Then rip it up to over 4300 to run the stops on the bears from that triple top level to complete the C wave and give a better short entry for more patient bears. It could happen on the backs of some mild fear of the FOMC meeting next Wednesday. I'm not counting on it of course as most the fear of rate hikes is already baked into the market now. Anyway, it's just a waiting game at this point I think as the best short should be late next week. Have a blessed day.

Oscar Carboni also thinks along similar lines as I do. Here's his video...