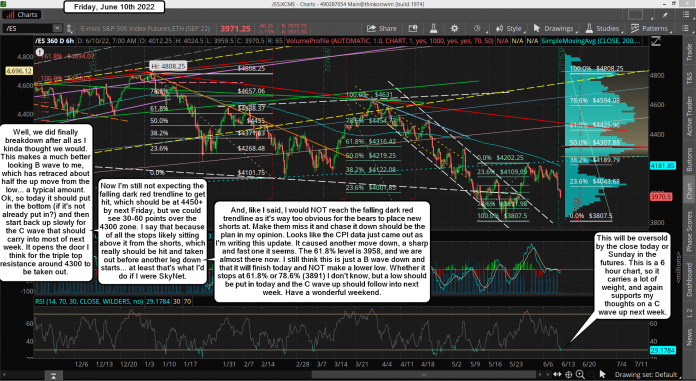 Well, we did finally breakdown after all as I kinda thought we would. This makes a much better looking B wave to me, which has retraced about half the up move from the low... a typical amount. Ok, so today it should put in the bottom (if it's not already put in?) and then start back up slowly for the C wave that should carry into most of next week. It opens the door I think for the triple top resistance around 4300 to be taken out.

Now I'm still not expecting the falling dark red trendline to get hit, which should be at 4450+ by next Friday, but we could see 30-60 points over the 4300 zone. I say that because of all the stops likely sitting above it from the shorts, which really should be hit and taken out before another leg down starts... at least that's what I'd do if I were SkyNet.

And, like I said, I would NOT reach the falling dark red trendline as it's way too obvious for the bears to place new shorts at. Make them miss it and chase it down should be the plan in my opinion. Looks like the CPI data just came out as I'm writing this update. It caused another move down, a sharp and fast one it seems. The 61.8% level is 3958, and we are almost there now. I still think this is just a B wave down and that it will finish today and NOT make a lower low. Whether it stops at 61.8% or 78.6% (3891) I don't know, but a low should be put in today and the C wave up should follow into next week. Have a wonderful weekend.