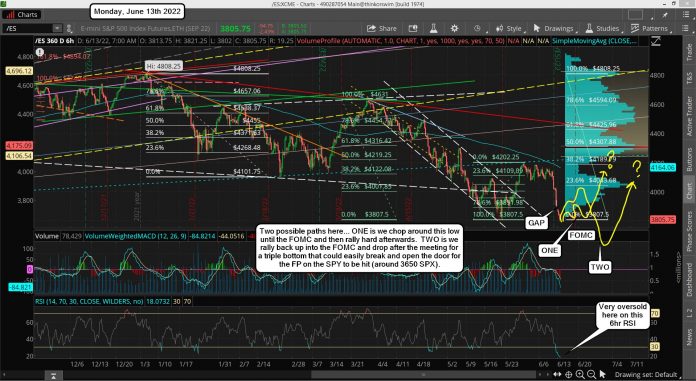 Last week I was looking for the (likely) B wave to complete with a pullback to 4035-4040 or as deep as 3985 or so, but those levels failed to hold. Part of my thinking that we were in some kind of B wave and that there was a C wave up into late this week, with 4200-4300 as a target, was based on good of a job that B wave was doing to lower the bearish sentiment.

But that all went out the window with the drop on Thursday, then Friday and now into the Sunday night futures. The bears aren't asleep anymore and the likelihood a C wave up into late this week is dead now. I was basing my thinking with the typical pattern of a rally into OPEX, and with the seasonality pattern of weakness into the second half of June.

It was all lined up nicely up until last Thursday when the bottom fell out and this nasty drop woke up all the bears. From that 4202 high on May the 30th until last Thursday there was lots of reasons to think that seasonality and OPEX pattern would work, but not now. Instead I suspect we will this weakness continue in the FOMC meeting but I'm not expecting any new lower low, but if it does it shouldn't be by much.

Just a quick pierce is possible I guess, but I really don't give it high odds. And I certainly don't think we are going down to the 3650 SPX area to hit the FP on the SPY. No, I think they are going to save that for a later time this year.

We should dance around this area into Wednesday and then rally up out of it into Friday to kill all the puts expiring that day, which are a whole lot more the calls are right now. And the rally should continue into the end of this month I suspect as I think the seasonality pattern has been pushed up to now having the weakness instead of the last 2 weeks of June.

Either that or it's delayed and will come some time in July... hard too say for sure. But the current 3 day drop is really what I was looking for late this month. Anyway, we'll just have to adapt as the market rarely gives us what we want. So a rally to 4300+ now is more likely then just 4200-4300 and failing to run the stops above that triple top zone at 4300 like I've mentioned before.

It could take several weeks though as it's still tough resistance. But I just think that will this drop getting all the bears so "beared-up" again that they will eventually take out 4300 and run up higher then I thought. Meaning the falling dark red trendline is back on the table now, which is in the 4400-4450 area... depending on "when" you hit it. Ok, that about covers everything. In summery I think "no new lower low", "chop into the FOMC", and "rally up into OPEX after the FOMC". Have a blessed day.

Looks like we have the "slight pierce" of the lows this morning, which I still think we are much closer to a bottom and a multi-week rally is near, versus and crash. So, if we chop around in front of the FOMC then I think it will carve out a low and then we go up afterwards.

But, and this is a BIG BUT, if instead we rally up into the FOMC then the door is open for another drop to take out the current double bottom, and that will open the door for a flush out to the 3650 area.

Again, I'm leaning toward a small move up (chop basically) but I have to adapt and go with whatever the market gives me. If instead we rally like 200-300 points into the Fed meeting then I'll be really concerned about a possible drop the FP on the SPY. I have been thinking they are saving that for a future time period later this year, which was the case back in 2018 when I had a FP (upside then, versus downside currently) that came out in February and hit in September.

That marked the top of the market and then we had the big drop in Christmas. Meaning these large FP's are commonly put out many months it advance but there's truly no way to know when they will be hit. I can only go on past experience. If they hit it now in June then the door will be open for the reversal to happen into the end of the year, just like in 2018 it did. Back then the FP marked the high for the year and it reversed back down hard afterwards.

This time the FP would mark the low for the year and therefore it's logical to think the reversal back up will last until the end of the year again... that's unless we hit some crazy blow off top of 6000+ into September. Do that and I'd expect a crash afterwards. I'm not expecting it though as while I still think we will hit a crazy high level I don't think it will happen until 2023, as that's the year I think we'll see the big 1929 style crash again.

Anyway, that's all just speculation and too far in the future to worry about now. Short term I think we continue to have weakness into the FOMC and then rally up afterwards, but if instead we rally up (again, roughly 200-300 points) into the meeting the door is open again for another drop afterwards into the end of this week. Have a blessed day.