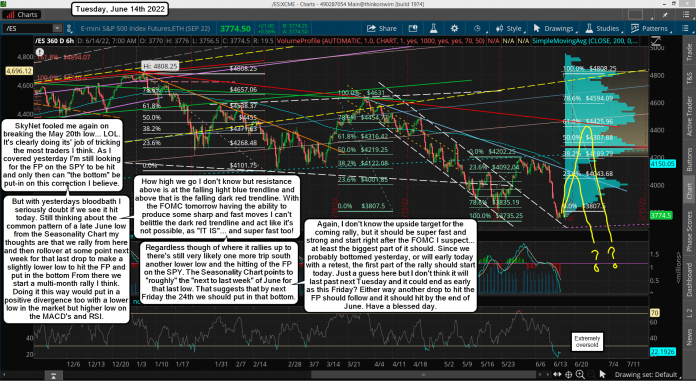 SkyNet fooled me again on breaking the May 20th low... LOL. It's clearly doing its' job of tricking the most traders I think. As I covered yesterday I'm still looking for the FP on the SPY to be hit and only then can "the bottom" be put-in on this correction I believe.

But with yesterdays bloodbath I seriously doubt if we see it hit today. Still thinking about the common pattern of a late June low from the Seasonality Chart my thoughts are that we rally from here and then rollover at some point next week for that last drop to make a slightly lower low to hit the FP and put in the bottom From there we start a multi-month rally I think. Doing it this way would put in a positive divergence too with a lower low in the market but higher low on the MACD's and RSI.

Regardless though of where it rallies up to there's still very likely one more trip south another lower low and the hitting of the FP on the SPY. The Seasonality Chart points to "roughly" the "next to last week" of June for that last low. That suggests that by next Friday the 24th we should put in that bottom.

Again, I don't know the upside target for the coming rally, but it should be super fast and strong and start right after the FOMC I suspect... at least the biggest part of it should. Since we probably bottomed yesterday, or will early today with a retest, the first part of the rally should start today. Just a guess here but I don't think it will last past next Tuesday and it could end as early as this Friday? Either way another drop to hit the FP should follow and it should hit by the end of June. Have a blessed day.

Here's the latest from Peter Eliades, who is saying something very similar to what I'm saying... but he doesn't know about the fake print of course.