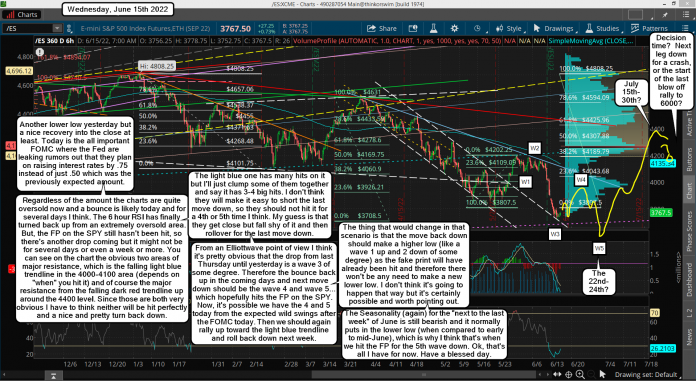 Another lower low yesterday but a nice recovery into the close at least. Today is the all important FOMC where the Fed are leaking rumors out that they plan on raising interest rates by .75 instead of just .50 which was the previously expected amount.

Regardless of the amount the charts are quite oversold now and a bounce is likely today and for several days I think. The 6 hour RSI has finally turned back up from an extremely oversold area. But, the FP on the SPY still hasn't been hit, so there's another drop coming but it might not be for several days or even a week or more. You can see on the chart the obvious two areas of major resistance, which is the falling light blue trendline in the 4000-4100 area (depends on "when" you hit it) and of course the major resistance from the falling dark red trendline up around the 4400 level. Since those are both very obvious I have to think neither will be hit perfectly and a nice and pretty turn back down.

The light blue one has many hits on it but I'll just clump some of them together and say it has 3-4 big hits. I don't think they will make it easy to short the last move down, so they should not hit it for a 4th or 5th time I think. My guess is that they get close but fall shy of it and then rollover for the last move down.

From an Elliottwave point of view I think it's pretty obvious that the drop from last Thursday until yesterday is a wave 3 of some degree. Therefore the bounce back up in the coming days and next move down should be the wave 4 and wave 5... which hopefully hits the FP on the SPY. Now, it's possible we have the 4 and 5 today from the expected wild swings after the FOMC today. Then we should again rally up toward the light blue trendline and roll back down next week.

The thing that would change in that scenario is that the move back down should make a higher low (like a wave 1 up and 2 down of some degree) as the fake print will have already been hit and therefore there won't be any need to make a new lower low. I don't think it's going to happen that way but it's certainly possible and worth pointing out.

The Seasonality (again) for the "next to the last week" of June is still bearish and it normally puts in the lower low (when compared to early to mid-June), which is why I think that's when we hit the FP for the 5th wave down. Ok, that's all I have for now. Have a blessed day.