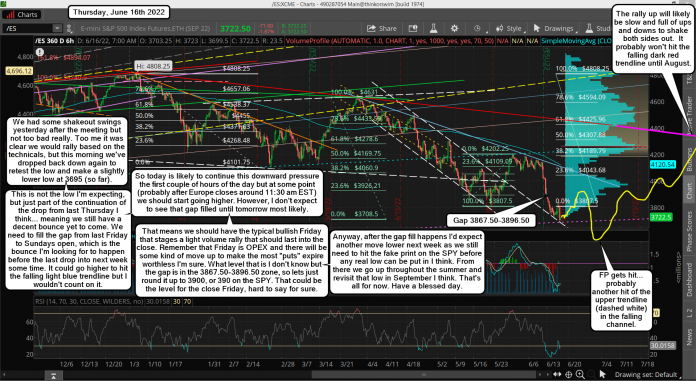 We had some shakeout swings yesterday after the meeting but not too bad really. Too me it was clear we would rally based on the technicals, but this morning we've dropped back down again to retest the low and make a slightly lower low at 3695 (so far).

This is not the low I'm expecting, but just part of the continuation of the drop from last Thursday I think... meaning we still have a decent bounce yet to come. We need to fill the gap from last Friday to Sundays open, which is the bounce I'm looking for to happen before the last drop into next week some time. It could go higher to hit the falling light blue trendline but I wouldn't count on it.

So today is likely to continue this downward pressure the first couple of hours of the day but at some point (probably after Europe closes around 11:30 am EST) we should start going higher. However, I don't expect to see that gap filled until tomorrow most likely.

That means we should have the typical bullish Friday that stages a light volume rally that should last into the close. Remember that Friday is OPEX and there will be some kind of move up to make the most "puts" expire worthless I'm sure. What level that is I don't know but the gap is in the 3867.50-3896.50 zone, so lets just round it up to 3900, or 390 on the SPY. That could be the level for the close Friday, hard to say for sure.

Anyway, after the gap fill happens I'd expect another move lower next week as we still need to hit the fake print on the SPY before any real low can be put in I think. From there we go up throughout the summer and revisit that low in September I think. That's all for now. Have a blessed day.