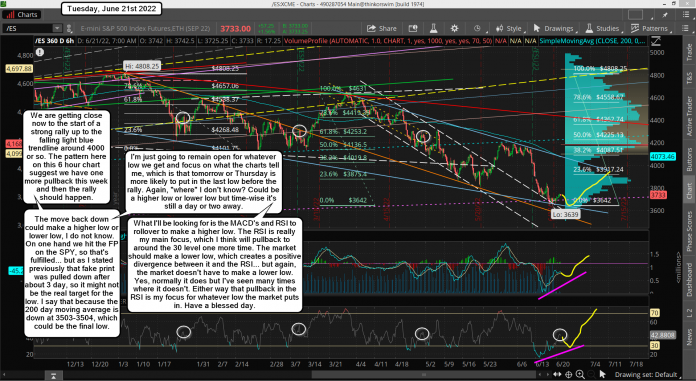 We are getting close now to the start of a strong rally up to the falling light blue trendline around 4000 or so. The pattern here on this 6 hour chart suggest we have one more pullback this week and then the rally should happen.

The move back down could make a higher low or lower low, I do not know. On one hand we hit the FP on the SPY, so that's fulfilled... but as I stated previously that fake print was pulled down after about 3 day, so it might not be the real target for the low. I say that because the 200 day moving average is down at 3503-3504, which could be the final low.

I'm just going to remain open for whatever low we get and focus on what the charts tell me, which is that tomorrow or Thursday is more likely to put in the last low before the rally. Again, "where" I don't know? Could be a higher low or lower low but time-wise it's still a day or two away.

What I'll be looking for is the MACD's and RSI to rollover to make a higher low. The RSI is really my main focus, which I think will pullback to around the 30 level one more time. The market should make a lower low, which creates a positive divergence between it and the RSI... but again, the market doesn't have to make a lower low. Yes, normally it does but I've seen many times where it doesn't. Either way that pullback in the RSI is my focus for whatever low the market puts in. Have a blessed day.