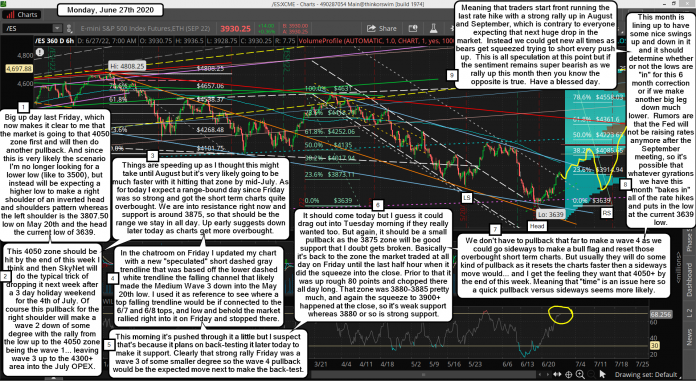 Big up day last Friday, which now makes it clear to me that the market is going to that 4050 zone first and will then do another pullback. And since this is very likely the scenario I'm no longer looking for a lower low (like to 3500), but instead will be expecting a higher low to make a right shoulder of an inverted head and shoulders pattern whereas the left shoulder is the 3807.50 low on May 20th and the head the current low of 3639.

This 4050 zone should be hit by the end of this week I think and then SkyNet will do the typical trick of dropping it next week after a 3 day holiday weekend for the 4th of July. Of course this pullback for the right shoulder will make a wave 2 down of some degree with the rally from the low up to the 4050 zone being the wave 1... leaving wave 3 up to the 4300+ area into the July OPEX.

Things are speeding up as I thought this might take until August but it's very likely going to be much faster with it hitting that zone by mid-July. As for today I expect a range-bound day since Friday was so strong and got the short term charts quite overbought. We are into resistance right now and support is around 3875, so that should be the range we stay in all day. Up early suggests down later today as charts get more overbought.

In the chatroom on Friday I updated my chart with a new "speculated" short dashed gray trendline that was based off the lower dashed white trendline the falling channel that likely made the Medium Wave 3 down into the May 20th low. I used it as reference to see where a top falling trendline would be if connected to the 6/7 and 6/8 tops, and low and behold the market rallied right into it on Friday and stopped there.

This morning it's pushed through it a little but I suspect that's because it plans on back-testing it later today to make it support. Clearly that strong rally Friday was a wave 3 of some smaller degree so the wave 4 pullback would be the expected move next to make the back-test.

It should come today but I guess it could drag out into Tuesday morning if they really wanted too. But again, it should be a small pullback as the 3875 zone will be good support that I doubt gets broken. Basically it's back to the zone the market traded at all day on Friday until the last half hour when it did the squeeze into the close. Prior to that it was up rough 80 points and chopped there all day long. That zone was 3880-3885 pretty much, and again the squeeze to 3900+ happened at the close, so it's weak support whereas 3880 or so is strong support.

We don't have to pullback that far to make a wave 4 as we could go sideways to make a bull flag and reset those overbought short term charts. But usually they will do some kind of pullback as it resets the charts faster then a sideways move would... and I get the feeling they want that 4050+ by the end of this week. Meaning that "time" is an issue here so a quick pullback versus sideways seems more likely.

This month is lining up to have some nice swings up and down in it and it should determine whether or not the lows are "in" for this 6 month correction or if we make another big leg down much lower.  Rumors are that the Fed will not be raising rates anymore after the September meeting, so it's possible that whatever gyrations we have this month "bakes in" all of the rate hikes and puts in the low at the current 3639 low.

Meaning that traders start front running the last rate hike with a strong rally up in August and September, which is contrary to everyone expecting that next huge drop in the market.  Instead we could get new all times as bears get squeezed trying to short every push up.  This is all speculation at this point but if the sentiment remains super bearish as we rally up this month then you know the opposite is true.  Have a blessed day.