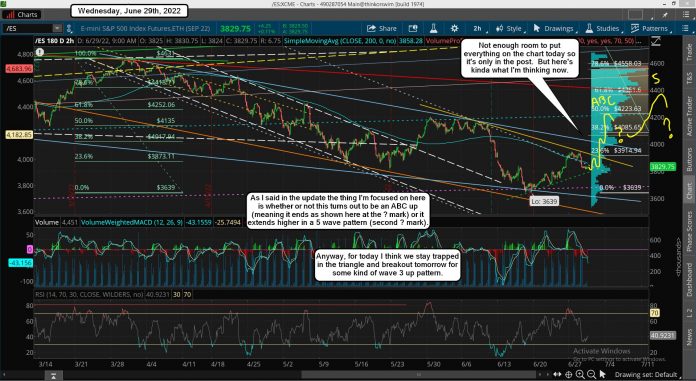 They never make is easy, that's a fact!

The move up to 3950 yesterday and drop to 3812 this morning was the move I was looking for next week, and after we reached 4050+ tomorrow or Friday. But they tricked me (and probably a lot of traders) by falling shy of the upside target and doing the drop early.

I'm not sure what to think about next week at this point as this drop might have changed that forecast and allow any rally that starts today to continue after the holiday weekend. Just looking at the move up from the low of 3639 to the 3950 high and calling it a wave 1 and the drop to 3812 a wave 2 then we "could" be starting a wave 3 up now.

As for today I think we have already bottomed at 3812 as it is right into a rising dashed green trendline of support (not a perfect hit, but close) and we are up off of that early low now and even green as I write this update.

The RSI is trying to turn up here on this 6 hour chart, and it's at a zone where "turns" are common when compared to the recent past.  Other shorter time frames have bottomed as well, so there's many good clues that's the low is in now, or will be during the first half of today's trading.  We have also made that right shoulder of the inverted head and shoulders pattern I talked about in prior posts.

Plus everyone should be nice and "beared up" right now and will short any rally today... which will add fuel to it and allow a wave 3 up to play out.  So there's many reasons here to think we aren't going to make a new low and will rally again very soon.

As for the wave count...

If we rally only to 4123, pullback and then rally higher to 4200+ then we will have done a 5 wave move. So even if we drop back down again to retest the 3639 low in Sept/Oct the bear market should be finished as the 5 wave advance would be a bigger wave 1 up of some degree and the double bottom a wave 2, which leaves the bigger degree wave 3 up into the end of the year.

This all aligns up nicely with the seasonality pattern for mid-term years. This is be something very important to pay attention going forward this month and next.

Alternatively is that we still do the 5 wave push up but it happens early (like into mid-July) and the drop for the retest of the low happens into the end of July (higher low here... like 50-61.8% pullback)... and then rally back up for another slightly higher high in August, but still not a new all time high, then we will have a completed an ABC up instead.

The 5 waves up to mid-July would be the A wave, then down to the end of July the B wave, and another 5 waves up into August would be the C wave. That would suggest we are still in the bear market and that any drop into Sept/Oct will make a lower low as the entire ABC up from the current low to the August high would just be a bigger degree B wave.  Then the six month drop from the January high to the June bottom would be an A wave... leaving the C wave into this fall.

Yeah, that's a scary one as it could setup a crash wave for sure. Or the drop into Sept/Oct is just the first wave 1 inside that C wave and the rally into the end of the year would be a wave 2 bounce for a lower high of course. That would drag this out into next year for sure as the wave 3 down inside that C wave would be in the first quarter of 2023.  Too much speculation right now, so let's just look at the short term.

For today I think we are in a wave 3 up of some degree and we'll carve out the smaller degree wave 1 up and 2 down by the close and then the wave 3 inside 3 will happen tomorrow. It's the last day of the month and if I'm right they will take out the 4000 level and the falling light blue trendline.

Today should be used to get those smaller degree 1's and 2's out of the way... kinda like bouncing small up and down to get the feeling of the trampoline before you take the biggest bounce (the multi-wave 3 up). The up's and down's expected should make a triangle pattern between the 3812 low and the 3950 high, which is called a pennant flag and is bullish. It sets up wave 3 by keeping bears in short and shaking out bulls.

I've added a falling yellow trendline connecting the 3950 high yesterday to the high 6/7-6/9 highs around the 4150's or so.  Between that falling trendline and the rising dashed green trendline is the zone where the market should stay trapped inside today and hopefully breakout tomorrow.

That's what I think will happen today. Let's see. Have a blessed day.

P.S.  I some how thought he was killed... too nice a guy, which would be just the kind to step up and expose these satanists.  Sad. 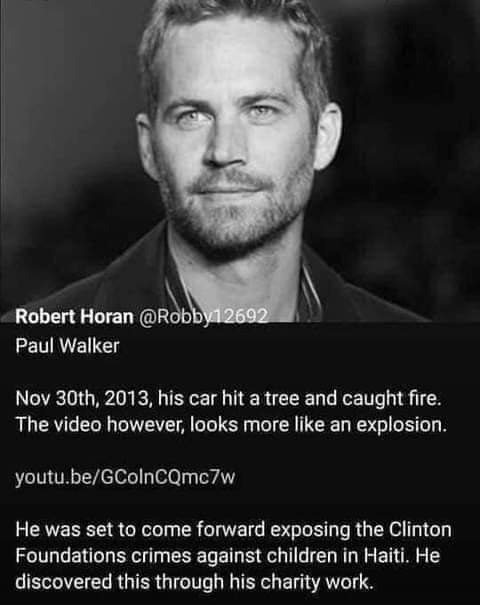