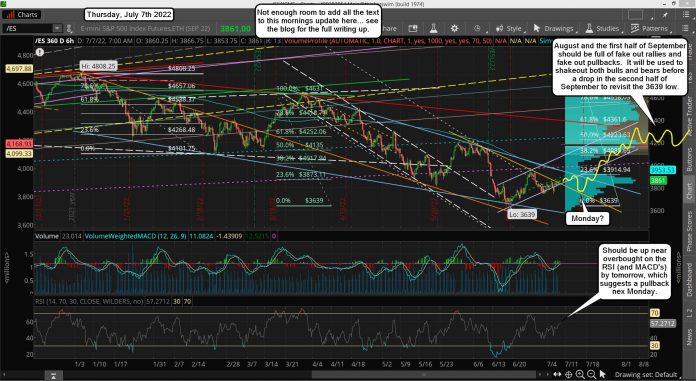 A short lived pop after the minutes from the FOMC yesterday, as it got erased by the close. This morning we see a small up move but again, this is exactly what I've been thinking is going to play out... a whole lot of chop. Just a grind fest that goes up slowly and down quickly.

I still maintain that we'll stay in a big range from as high as 4300 to the current low into early October when the big boys come back. That's when the huge rally up to new highs should start. Until then we'll see NO big squeezes, just slow grinds up that get overbought short term and cause a quick but short lived pullback. Today the various short term charts are all mixed but looking more bearish then bullish.

On my chart I moved the dashed green rising trendline and replaced it with a purple rising channel. The location I moved the rising dashed green trendline is exactly where the market rallied up to yesterday after the FOMC, hit it, and reversed back down. So it's worth following as we could see the market grind just under it all the way up to the falling light blue trendline of resistance... which is around 3925 where they intercept.

The rising purple channel should be important into August as I suspect we'll be inside it as we grind up to the falling red trendline just over 4300 a little. However, I also think we could drop out of it before then and recapture it later.

I know I've mentioned that we should get up 4050 or so into the July OPEX next week but getting through the falling light blue trendline (and rising dashed green trendline) around that 3925 crossing might not be that easy... especially if we grind up there without pulling back and resetting the charts. A grind up there will very likely have the short term charts too overbought and weak to push through it. 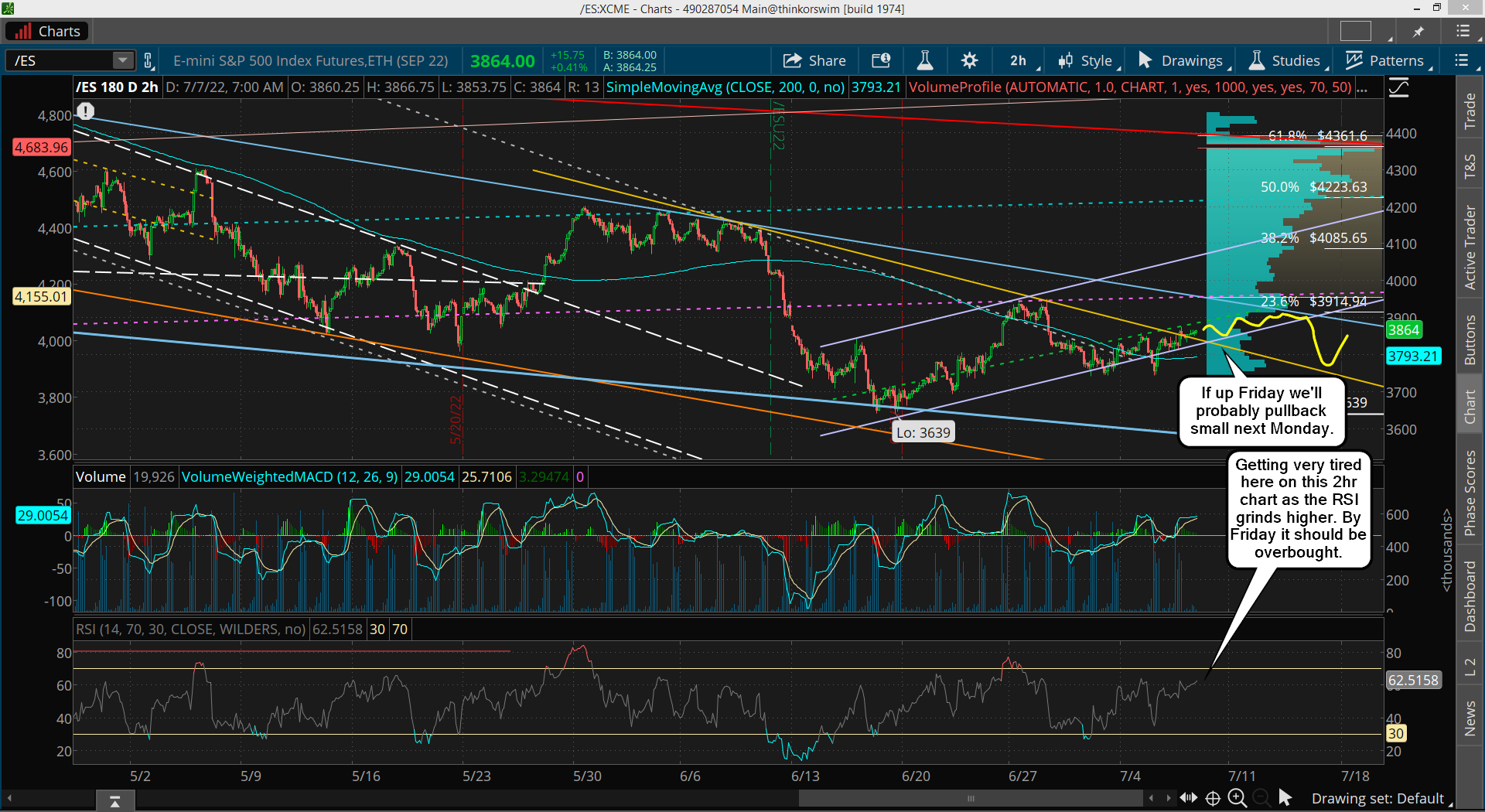 That's why I think we can drop out of the rising purple channel around that area. And it's the trickiest move as many will be looking for the 4000-4050 zone to short but resistance is around 3925... which is also shy of the 3950 double tops last week. The market never makes it easy, that's for sure. So even-though we broke out of the triangle I spoke of yesterday, which had the rising dashed green trendline where the lower rising purple trendline is now, there's a bigger triangle using the falling light blue trendline with that rising lower purple trendline.

They meet around 3905 on July 14th, so again, there's a ton of resistance overhead now. The best way for the market to get through them all is to reset the short term charts, but that would require a sharp drop like we had on Tuesday down to 3744... and again, that would take us out of the rising purple trendline.

I don't get the feeling they are going to do that anytime soon. It looks more and more like they will grind up into next week to get closer to the falling light blue trendline before stopping and reversing back down. If so then I'd say the pullback target will be the falling orange trendline that it broke out of yesterday. Of course next week it will be lower, but it could be around the 3744 Tuesday low by the time it gets hit late next week. All just speculation using trendlines and getting a feel for the MACD's and RSI and where they should turn.

Seasonality too... which points to a small pullback after next Friday but then a continued move up into the end of July. Maybe that's where it gets back into the rising purple channel and runs for the falling red trendline? August is quite mixed with several pullbacks and rallies, so it will be interesting for sure.

My thoughts on it will be that the falling red trendline will be seen by everyone and shorted heavy when hit. So the pullbacks and rallies in August will be used to shake out shorts and trap longs looking for much higher prices. The first half of September will likely continue this "shakeout" but the second half is very likely to be where the real pullback starts that can revisit the 3639 low into early October. 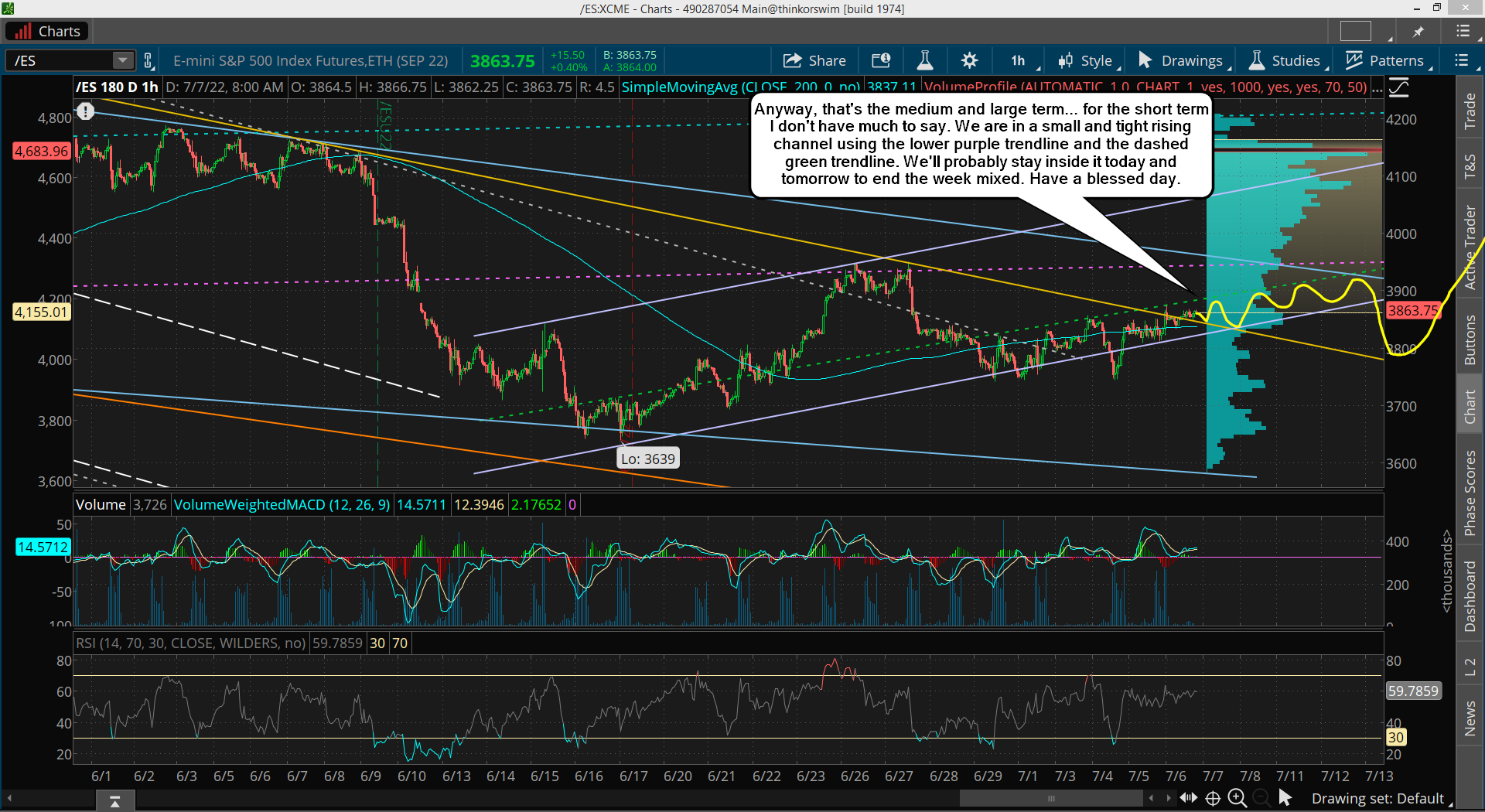 Anyway, that's the medium and large term... for the short term I don't have much to say. We are in a small and tight rising channel using the lower purple trendline and the dashed green trendline. We'll probably stay inside it today and tomorrow to end the week mixed. Have a blessed day.

Here's a chart I posted yesterday in the chatroom that shows the rising dashed green trendline in the old location.  I moved it to the location of that purple line I drew on that chart. 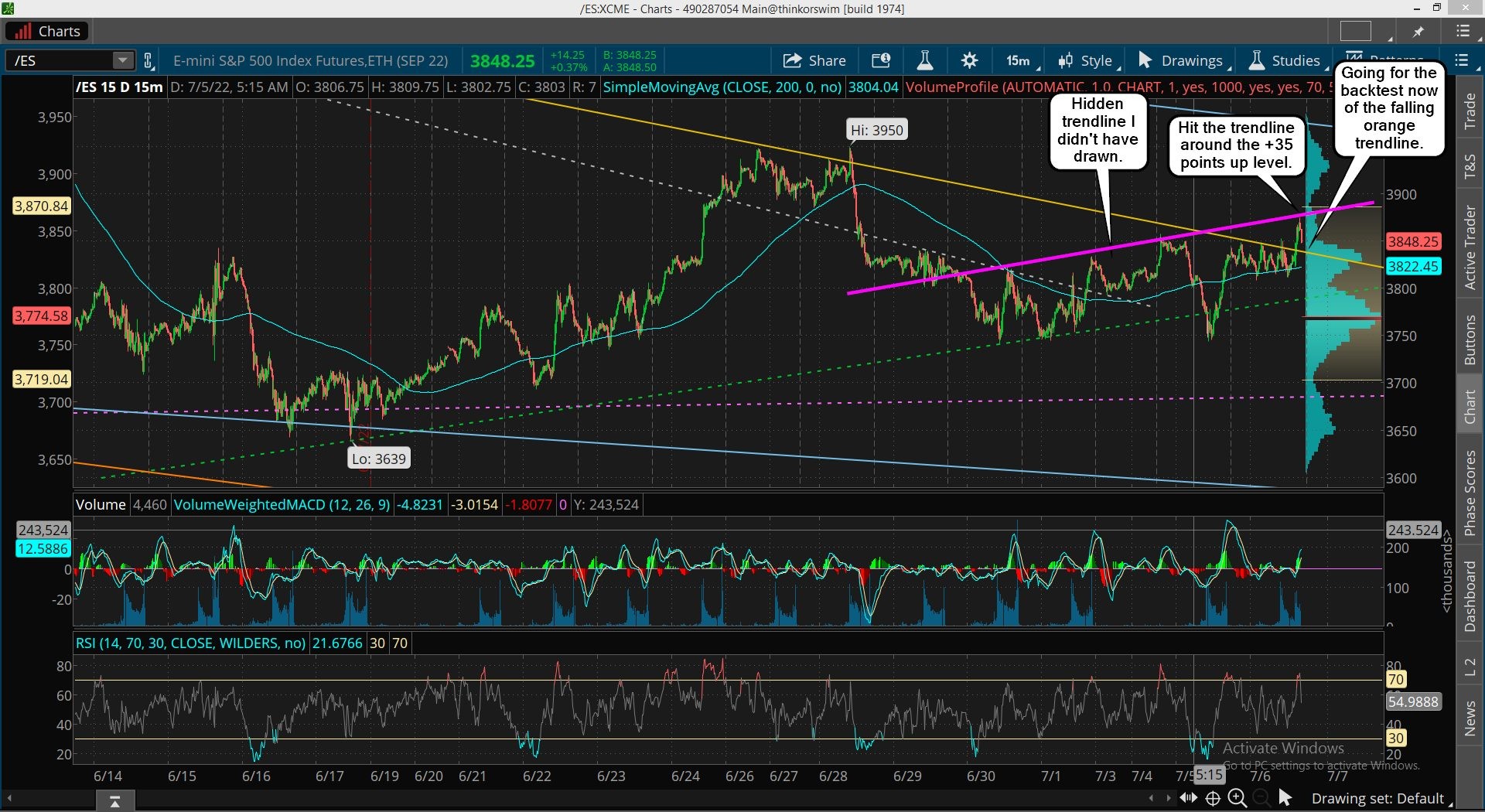