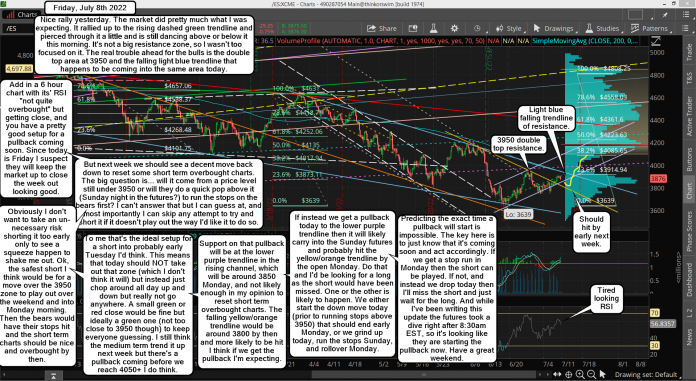 Nice rally yesterday. The market did pretty much what I was expecting. It rallied up to the rising dashed green trendline and pierced through it a little and is still dancing above or below it this morning. It's not a big resistance zone, so I wasn't too focused on it. The real trouble ahead for the bulls is the double top area at 3950 and the falling light blue trendline that happens to be coming into the same area today.

Add in a 6 hour chart with its' RSI "not quite overbought" but getting close, and you have a pretty good setup for a pullback coming soon. Since today is Friday I suspect they will keep the market up to close the week out looking good.

But next week we should see a decent move back down to reset some short term overbought charts. The big question is... will it come from a price level still under 3950 or will they do a quick pop above it (Sunday night in the futures?) to run the stops on the bears first? I can't answer that but I can guess at, and most importantly I can skip any attempt to try and short it if it doesn't play out the way I'd like it to do so.

Obviously I don't want to take an un-necessary risk shorting it too early only to see a squeeze happen to shake me out. Ok, the safest short I think would be for a move over the 3950 zone to play out over the weekend and into Monday morning. Then the bears would have their stops hit and the short term charts should be nice and overbought by then.

To me that's the ideal setup for a short into probably early Tuesday I'd think. This means that today should NOT take out that zone (which I don't think it will) but instead just chop around all day up and down but really not go anywhere. A small green or red close would be fine but ideally a green one (not too close to 3950 though) to keep everyone guessing. I still think the medium term trend it up next week but there's a pullback coming before we reach 4050+ I do think.

Support on that pullback will be at the lower purple trendline in the rising channel, which will be around 3850 Monday, and not likely enough in my opinion to reset short term overbought charts. The falling yellow/orange trendline would be around 3800 by then and more likely to be hit I think if we get the pullback I'm expecting.

If instead we get a pullback today to the lower purple trendline then it will likely carry into the Sunday futures and probably hit the yellow/orange trendline by the open Monday. Do that and I'd be looking for a long as the short would have been missed. One or the other is likely to happen. We either start the down move today (prior to running stops above 3950) that should end early Monday, or we grind up today, run the stops Sunday, and rollover Monday.

Predicting the exact time a pullback will start is impossible. The key here is to just know that it's coming soon and act accordingly. If we get a stop run in Monday then the short can be played. If not, and instead we drop today then I'll miss the short and just wait for the long. And while I've been writing this update the futures took a dive right after 8:30am EST, so it's looking like they are starting the pullback now. Have a great weekend.