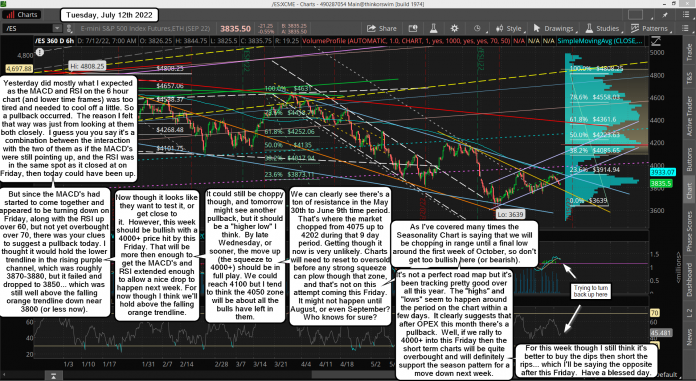 Yesterday did mostly what I expected as the MACD and RSI on the 6 hour chart (and lower time frames) was too tired and needed to cool off a little. So a pullback occurred.  The reason I felt that way was just from looking at them both closely.  I guess you you say it's a combination between the interaction with the two of them as if the MACD's were still pointing up, and the RSI was in the same spot as it closed at on Friday, then today could have been up.

But since the MACD's had started to come together and appeared to be turning down on Friday, along with the RSI up over 60, but not yet overbought over 70, there was your clues to suggest a pullback today. I thought it would hold the lower trendline in the rising purple channel, which was roughly 3870-3880, but it failed and dropped to 3850... which was still well above the falling orange trendline down near 3800 (or less now).

Now though it looks like they want to test it, or get close to it.  However, this week should be bullish with a 4000+ price hit by this Friday. That will be more then enough to get the MACD's and RSI extended enough to allow a nice drop to happen next week. For now though I think we'll hold above the falling orange trendline.

It could still be choppy though, and tomorrow might see another pullback, but it should be a "higher low" I think.  By late Wednesday, or sooner, the move up (the squeeze to 4000+) should be in full play. We could reach 4100 but I tend to think the 4050 zone will be about all the bulls have left in them.

We can clearly see there's a ton of resistance in the May 30th to June 9th time period. That's where the market chopped from 4075 up to 4202 during that 9 day period. Getting though it now is very unlikely. Charts will need to reset to oversold before any strong squeeze can plow though that zone, and that's not on this attempt coming this Friday. It might not happen until August, or even September? Who knows for sure?

As I've covered many times the Seasonality Chart is saying that we will be chopping in range until a final low around the first week of October, so don't get too bullish here (or bearish).

It's not a perfect road map but it's been tracking pretty good over all this year.  The "highs" and "lows" seem to happen around the period on the chart within a few days.  It clearly suggests that after OPEX this month there's a pullback.  Well, if we rally to 4000+ into this Friday then the short term charts will be quite overbought and will definitely support the season pattern for a move down next week.

For this week though I still think it's better to buy the dips then short the rips... which I'll be saying the opposite after this Friday.  Have a blessed day.