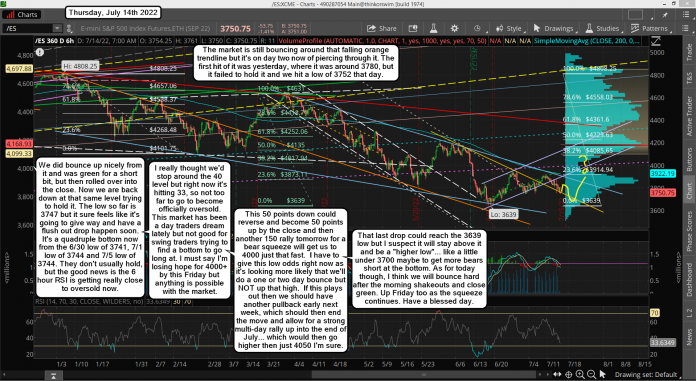 The market is still bouncing around that falling orange trendline but it's on day two now of piercing through it. The first hit of it was yesterday, where it was around 3780, but it failed to hold it and we hit a low of 3752 that day.

We did bounce up nicely from it and was green for a short bit, but then rolled over into the close. Now we are back down at that same level trying to hold it. The low so far is 3747 but it sure feels like it's going to give way and have a flush out drop happen soon. It's a quadruple bottom now from the 6/30 low of 3741, 7/1 low of 3744 and 7/5 low of 3744. They don't usually hold, but the good news is the 6 hour RSI is getting really close to oversold now.

I really thought we'd stop around the 40 level but right now it's hitting 33, so not too far to go to become officially oversold. This market has been a day traders dream lately but not good for swing traders trying to find a bottom to go long at. I must say I'm losing hope for 4000+ by this Friday but anything is possible with the market.

This 50 points down could reverse and become 50 points up by the close and then another 150 rally tomorrow for a bear squeeze will get us to 4000 just that fast.  I have to give this low odds right now as it's looking more likely that we'll do a one or two day bounce but NOT up that high.  If this plays out then we should have another pullback early next week, which should then end the move and allow for a strong multi-day rally up into the end of July... which would then go higher then just 4050 I'm sure.

That last drop could reach the 3639 low but I suspect it will stay above it and be a "higher low"... like a little under 3700 maybe to get more bears short at the bottom. As for today though, I think we will bounce hard after the morning shakeouts and close green. Up Friday too as the squeeze continues. Have a blessed day.