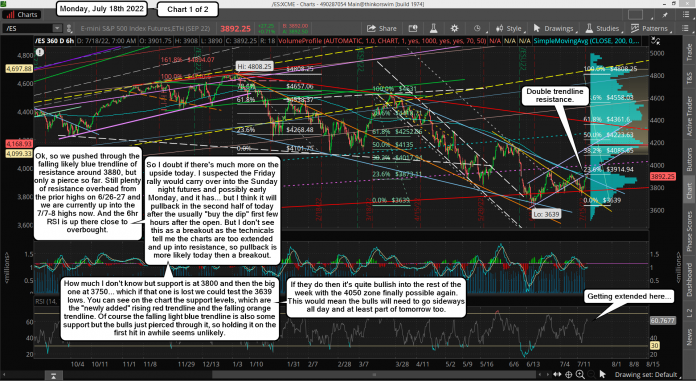 Ok, so we pushed through the falling likely blue trendline of resistance around 3880, but only a pierce so far. Still plenty of resistance overhead from the prior highs on 6/26-27 and we are currently up into the 7/7-8 highs now. And the 6hr RSI is up there close to overbought.

So I doubt if there's much more on the upside today. I suspected the Friday rally would carry over into the Sunday night futures and possibly early Monday, and it has... but I think it will pullback in the second half of today after the usually "buy the dip" first few hours after the open. But I don't see this as a breakout as the technicals tell me the charts are too extended and up into resistance, so pullback is more likely today then a breakout.

How much I don't know but support is at 3800 and then the big one at 3750... which if that one is lost we could test the 3639 lows. You can see on the chart the support levels, which are the "newly added" rising red trendline and the falling orange trendline. Of course the falling light blue trendline is also some support but the bulls just pierced through it, so holding it on the first hit in awhile seems unlikely.

If they do then it's quite bullish into the rest of the week with the 4050 zone finally possible again. This would mean the bulls will need to go sideways all day and at least part of tomorrow too. 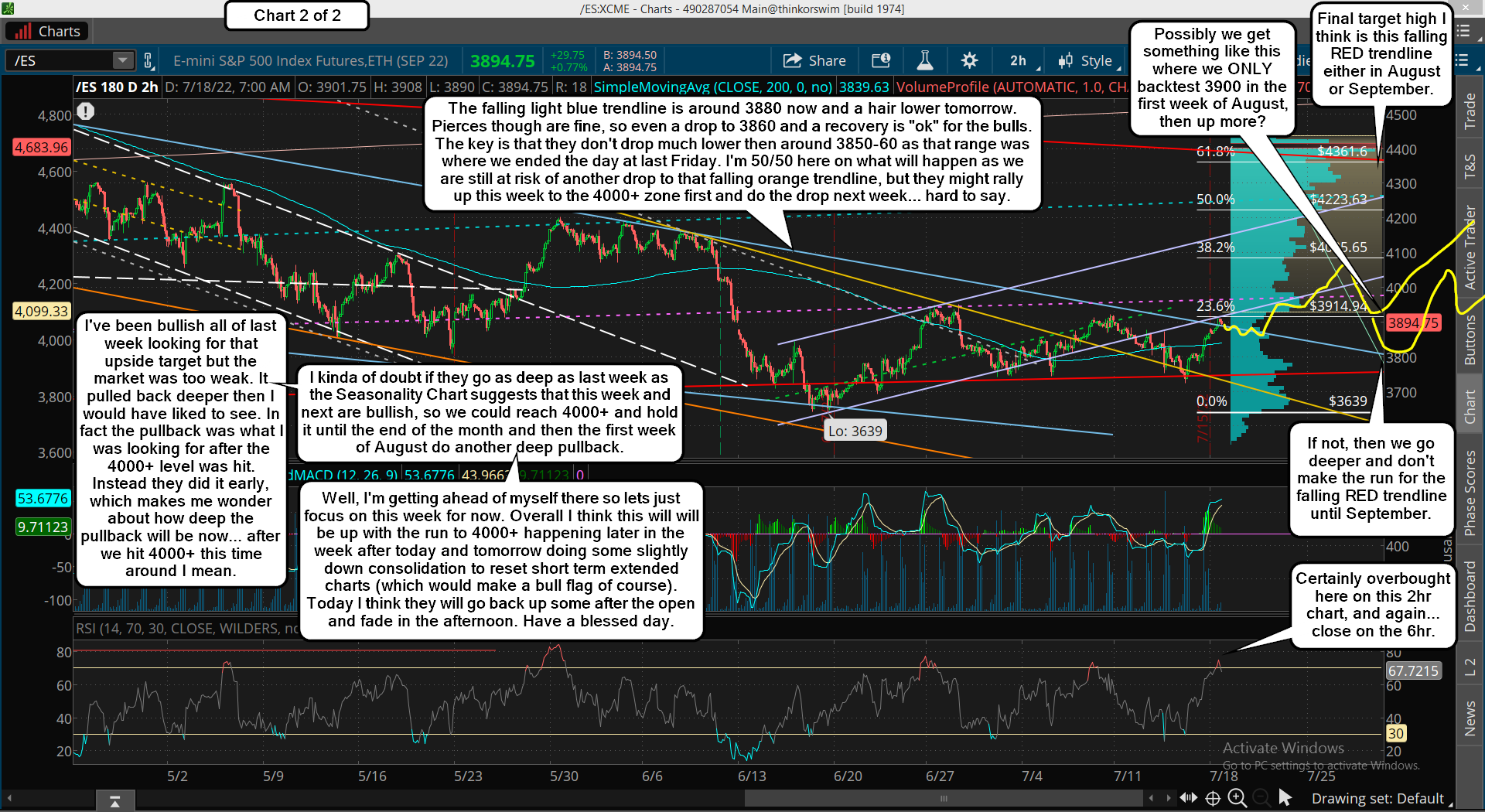 The falling light blue trendline is around 3880 now and a hair lower tomorrow. Pierces though are fine, so even a drop to 3860 and a recovery is "ok" for the bulls. The key is that they don't drop much lower then around 3850-60 as that range was where we ended the day at last Friday. I'm 50/50 here on what will happen as we are still at risk of another drop to that falling orange trendline, but they might rally up this week to the 4000+ zone first and do the drop next week... hard to say.

I've been bullish all of last week looking for that upside target but the market was too weak. It pulled back deeper then I would have liked to see. In fact the pullback was what I was looking for after the 4000+ level was hit. Instead they did it early, which makes me wonder about how deep the pullback will be now... after we hit 4000+ this time around I mean.

I kind of doubt if they go as deep as last week as the Seasonality Chart suggests that this week and next are bullish, so we could reach 4000+ and hold it until the end of the month and then the first week of August do another deep pullback.

Well, I'm getting ahead of myself there so lets just focus on this week for now. Overall I think this will will be up with the run to 4000+ happening later in the week after today and tomorrow doing some slightly down consolidation to reset short term extended charts (which would make a bull flag of course). Today I think they will go back up some after the open and fade in the afternoon. Have a blessed day.