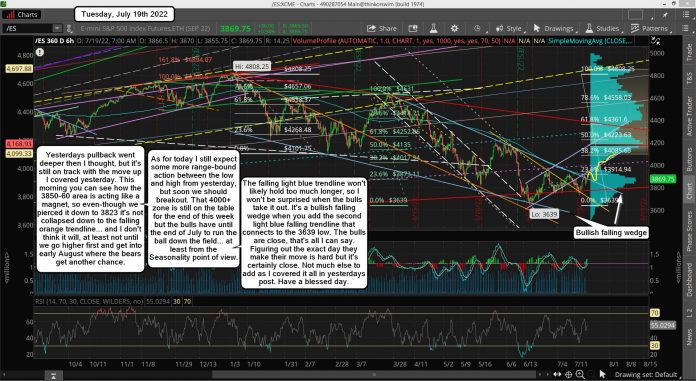 Yesterdays pullback went deeper then I thought, but it's still on track with the move up I covered yesterday. This morning you can see how the 3850-60 area is acting like a magnet, so even-though we pierced it down to 3823 it's not collapsed down to the falling orange trendline... and I don't think it will, at least not until we go higher first and get into early August where the bears get another chance.

As for today I still expect some more range-bound action between the low and high from yesterday, but soon we should breakout. That 4000+ zone is still on the table for the end of this week but the bulls have until the end of July to run the ball down the field... at least from the Seasonality point of view.

The falling light blue trendline won't likely hold too much longer, so I won't be surprised when the bulls take it out. It's a bullish falling wedge when you add the second light blue falling trendline that connects to the 3639 low. The bulls are close, that's all I can say. Figuring out the exact day they make their move is hard but it's certainly close. Not much else to add as I covered it all in yesterdays post. Have a blessed day.