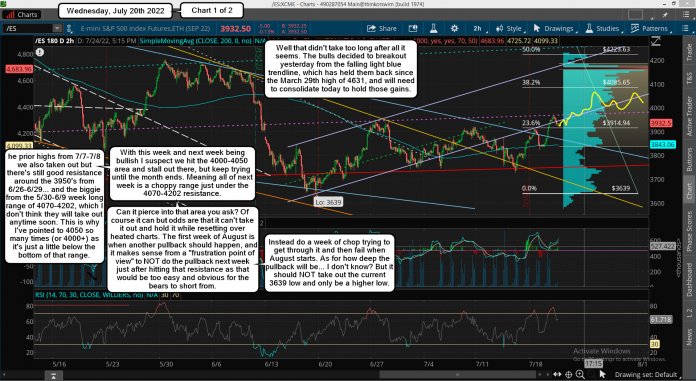 Well that didn't take too long after all it seems. The bulls decided to breakout yesterday from the falling light blue trendline, which has held them back since the March 29th high of 4631, and will need to consolidate today to hold those gains.

With this week and next week being bullish I suspect we hit the 4000-4050 area and stall out there, but keep trying until the month ends. Meaning all of next week is a choppy range just under the 4070-4202 resistance.

Can it pierce into that area you ask? Of course it can but odds are that it can't take it out and hold it while resetting over heated charts. The first week of August is when another pullback should happen, and it makes sense from a "frustration point of view" to NOT do the pullback next week just after hitting that resistance as that would be too easy and obvious for the bears to short from.

Instead do a week of chop trying to get through it and then fail when August starts. As for how deep the pullback will be... I don't know? But it should NOT take out the current 3639 low and only be a higher low. 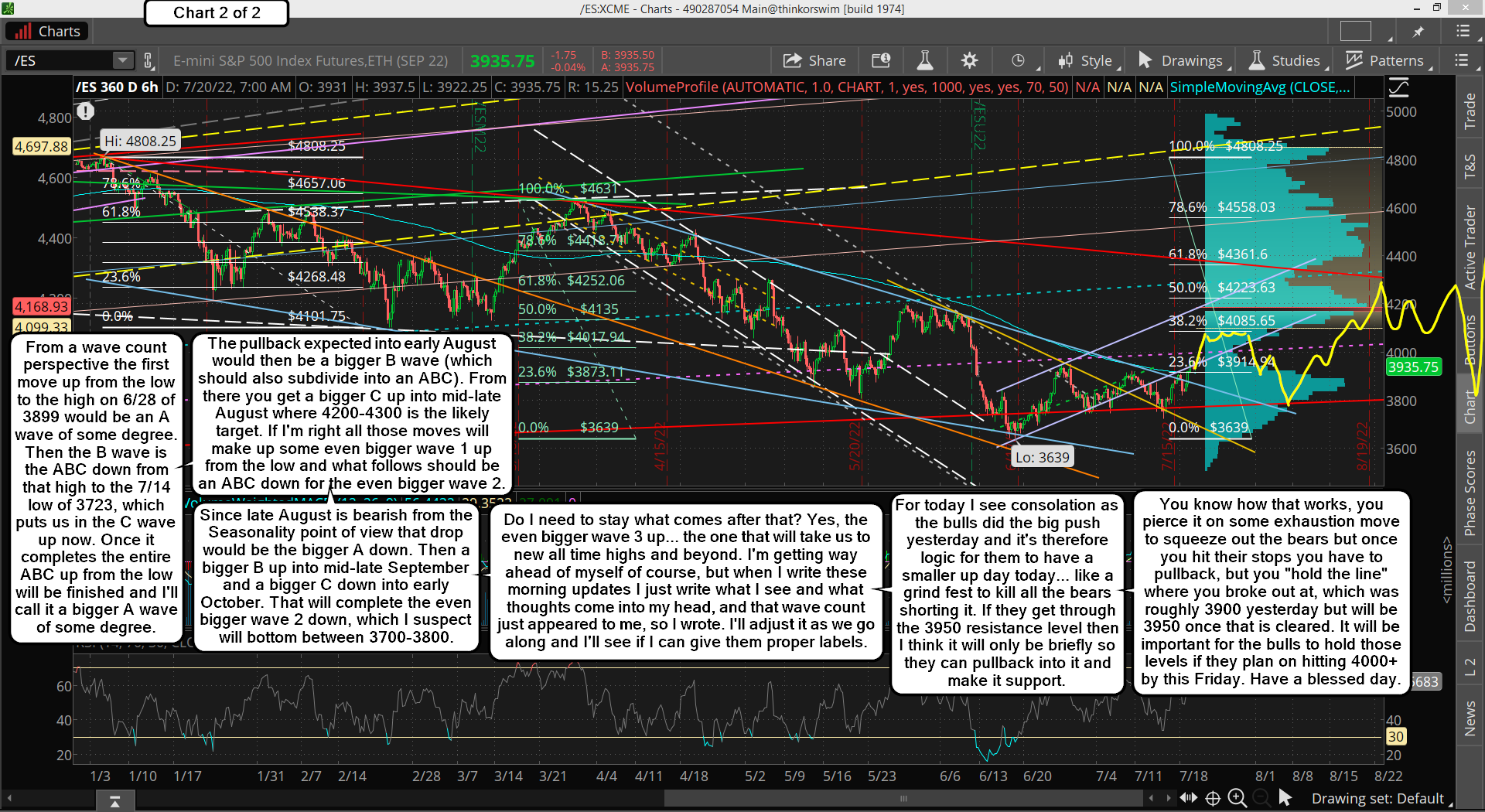 The pullback expected into early August would then be a bigger B wave (which should also subdivide into an ABC). From there you get a bigger C up into mid-late August where 4200-4300 is the likely target. If I'm right all those moves will make up some even bigger wave 1 up from the low and what follows should be an ABC down for the even bigger wave 2.

Since late August is bearish from the Seasonality point of view that drop would be the bigger A down. Then a bigger B up into mid-late September and a bigger C down into early October. That will complete the even bigger wave 2 down, which I suspect will bottom between 3700-3800.

Do I need to stay what comes after that? Yes, the even bigger wave 3 up... the one that will take us to new all time highs and beyond. I'm getting way ahead of myself of course, but when I write these morning updates I just write what I see and what thoughts come into my head, and that wave count just appeared to me, so I wrote. I'll adjust it as we go along and I'll see if I can give them proper labels.

For today I see consolation as the bulls did the big push yesterday and it's therefore logic for them to have a smaller up day today... like a grind fest to kill all the bears shorting it. If they get through the 3950 resistance level then I think it will only be briefly so they can pullback into it and make it support.

You know how that works, you pierce it on some exhaustion move to squeeze out the bears but once you hit their stops you have to pullback, but you "hold the line" where you broke out at, which was roughly 3900 yesterday but will be 3950 once that is cleared. It will be important for the bulls to hold those levels if they plan on hitting 4000+ by this Friday. Have a blessed day.