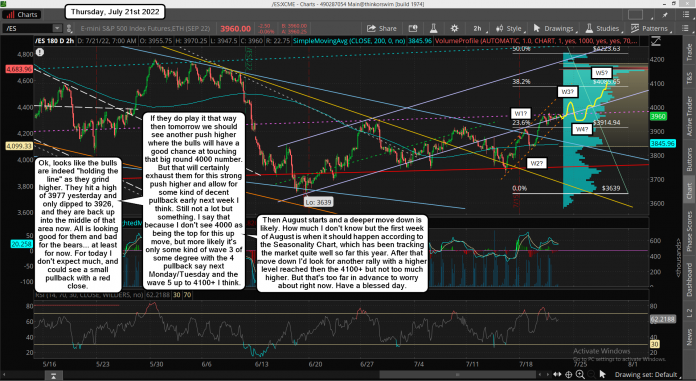 Ok, looks like the bulls are indeed "holding the line" as they grind higher. They hit a high of 3977 yesterday and only dipped to 3926, and they are back up into the middle of that area now. All is looking good for them and bad for the bears... at least for now. For today I don't expect much, and could see a small pullback with a red close.

If they do play it that way then tomorrow we should see another push higher where the bulls will have a good chance at touching that big round 4000 number. But that will certainly exhaust them for this strong push higher and allow for some kind of decent pullback early next week I think. Still not a lot but something. I say that because I don't see 4000 as being the top for this up move, but more likely it's only some kind of wave 3 of some degree with the 4 pullback say next Monday/Tuesday and the wave 5 up to 4100+ I think.

Then August starts and a deeper move down is likely. How much I don't know but the first week of August is when it should happen according to the Seasonality Chart, which has been tracking the market quite well so far this year. After that move down I'd look for another rally with a higher level reached then the 4100+ but not too much higher. But that's too far in advance to worry about right now. Have a blessed day.